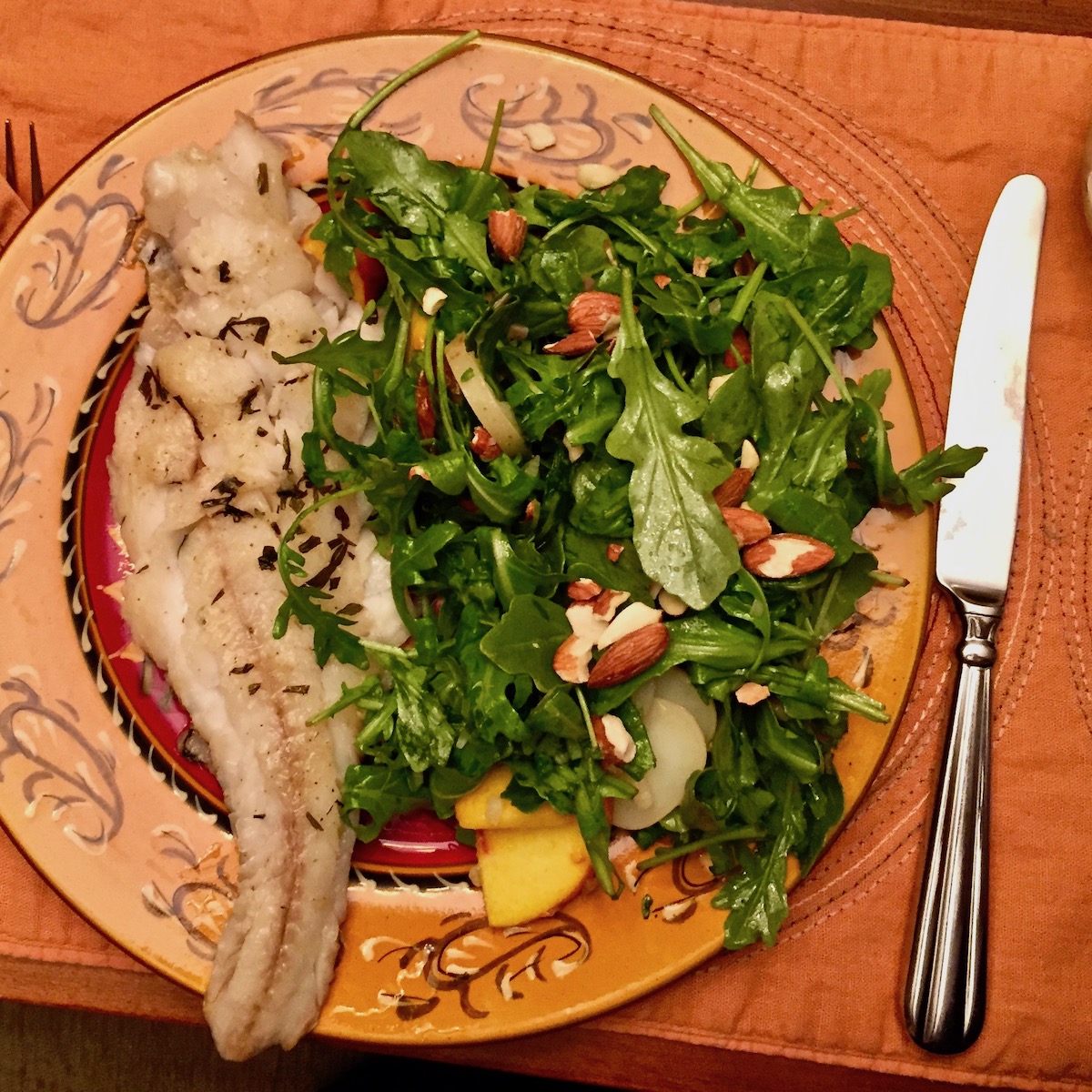 How to Make a Delicious Arugula Salad with Fresh Peaches

A couple of weeks ago I wrote a post on How to Cook Rainbow Trout Filets and served the trout with a delicious arugula and peaches salad. Many of you contacted me and asked for the salad recipe, so here it is.

We received some incredible fresh peaches from Harry and Davids that worked out perfectly for this dish. The arugula fingerling potatoes came with our CSA (Community Supported Agriculture) weekly box. All the ingredients are easy to fine in most supermarkets including the arugula.

Also known as salad rocket, rucola, rucoli, rugula, colewort, roquette, arugula is a green-leafy vegetable of Mediterranean origin. I didn't eat much of it until I was in my late 20's, early 30's and developed my taste for this peppery green.

I guess I first experienced it when Spring Mix became popular in some of the better restaurants but I quickly became hooked. It took my kids a number of years before they started enjoying it but now they both like it mixed in a salad or by itself especially the younger leaves that aren't quite as spicy.

Over the last couple of weeks, we have been trying to do more to support our favorite local restaurants and food purveyors to help them stay afloat until Pennsylvania “reopens”.  One of our go-to’s is a local fishmonger, Bywood Seafood Market.

The Reluctant Gourmet often stops in to pick up whatever’s fresh and so far, we have never been disappointed.  Yesterday was one of those days, and we were lucky to get three generous swordfish steaks.

They were so generous, in fact, that we decided to cut them in half to save some for weekend shish-kebab.  We seasoned the remaining steaks with olive oil, salt and pepper and grilled them for a few minutes until the gas ran out……which was just as well because a tremendous storm let loose a vicious downpour about 3 minutes in. 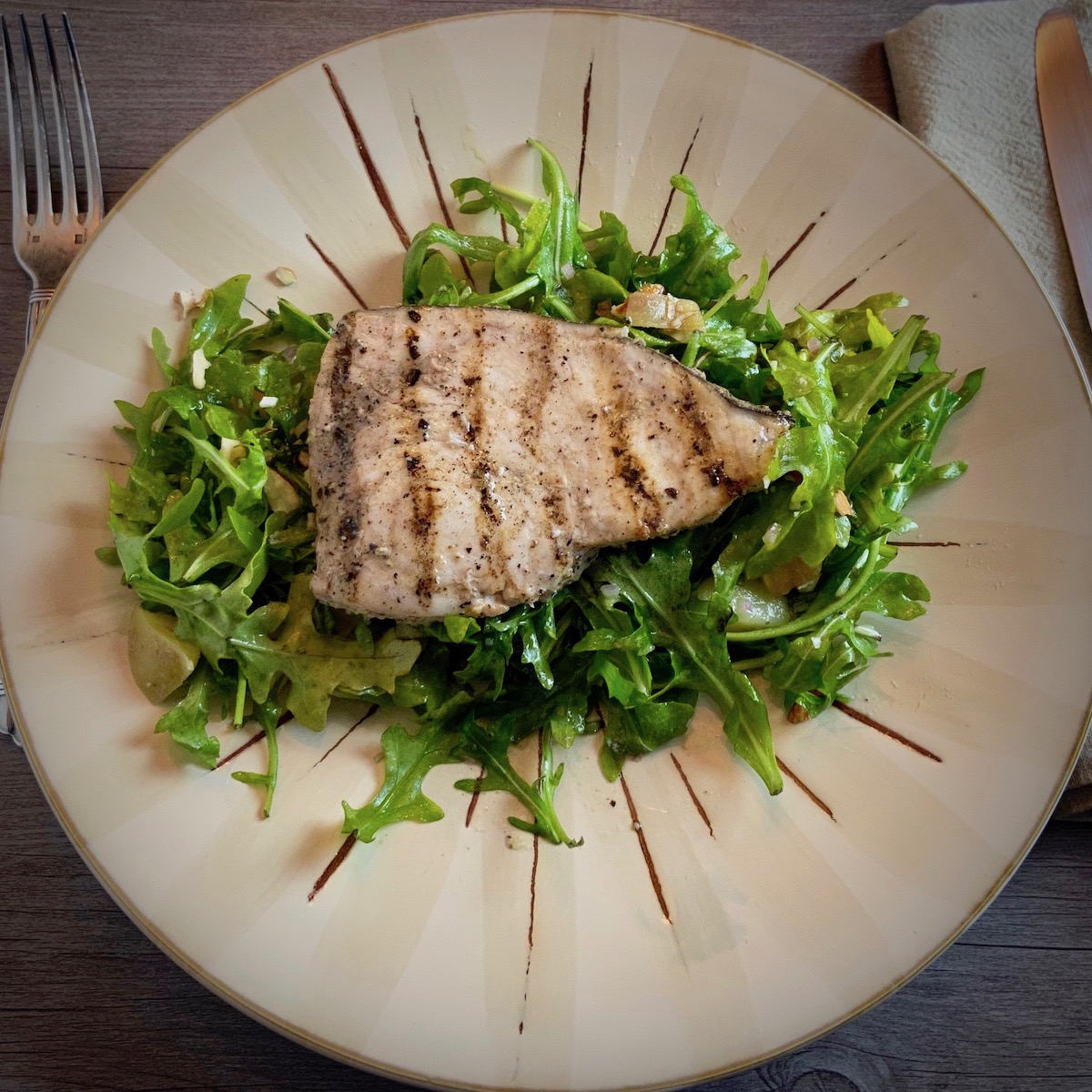 We finished them off on the stove and they were melt-in-your-mouth good.  But that’s not what this article is about J

When we decided to go with fish, I was reminded of one of my favorite salads that I typically associate with summer because it calls for peaches.  However, we had peaches in the freezer and I quickly realized we had all the other ingredients we needed as well.

This is adapted from an old Blue Apron recipe that paired the salad with pan-fried trout, but I think the salad complements just about anything and could probably even stand alone, maybe with a little bread on the side.

It is also a great selection if you are trying to fill your plate with more vegetables than meat, like we are.   And it’s very versatile so you can substitute ingredients depending on what you have on hand.

Most of my friends serve the salad before the main course but I served this salad as a side dish with pan fried trout but I also like to serve a salad after the main course. No matter when you serve this salad, it's delicious. 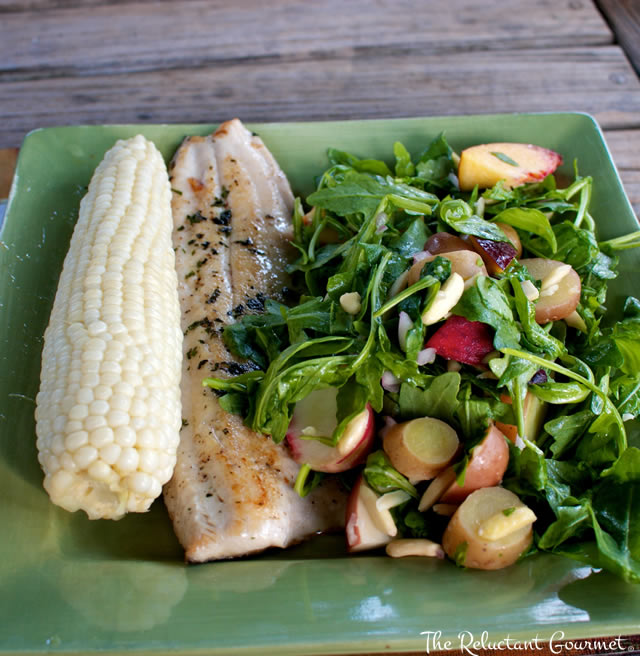