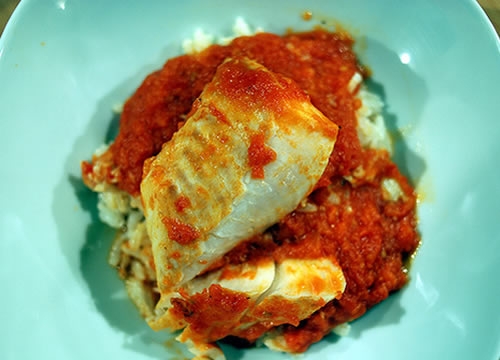 All Cod are Scrod, but Not All Scrod Are Cod.  How Odd.

I was making Eric Jorgensen's Hearty Fish Chowder using cod the other day, and it brought to mind scrod.  My dad always told me that scrod were young cod.  I did a bit of research to see if he was right.  It turns out that scrod means different things to different people in different parts of the country.

Some definitions of the word scrod do indicate that it means a young cod.  But, it also has a broader definition meaning any young, firm, white-fleshed fish.  In New England, the term scrod indicates the Catch of the Day, specifically fish that have been deboned, or filleted.

The word scrod is said to be derived from the now-obsolete Dutch word schrode, which means "a piece cut off."  If this is the true origin of the word scrod, it makes sense that it would mean a piece of fish that had been cut, or filleted.

There are many apocryphal stories circulating about the origin of the word scrod"”who knew this would be such a well-debated subject?  One story has it that a chef, ostensibly from the famous Parker House, would go down to the docks to choose the best of the best of that day's catch.  The secured catch received on dock, or scrod.

Pardon the pun, but that explanation is a bit fishy.  There is no actual documentation to support the story, although it is a fun one.

Another story is that scrod is a kind of shorthand for the freshest fish.  When fishing boats would go out for days at a time, the scrod were the fish that were on the top of the catch, or the ones most recently caught.  Over time, scrod came to designate the white fish of the highest quality.

So, I guess in a narrow sense, dad was right.  Scrod are young cod.  But when you see scrod on a restaurant menu, it refers to any young white-fleshed fish.  Scrod is more of a generic term.

So, the next time you buy filleted cod, you can certainly call it scrod.  But you can also call haddock or pollock scrod.  You might not know exactly what kind of fish was used to make your fish and chips, but you can be sure that it is some kind of scrod.