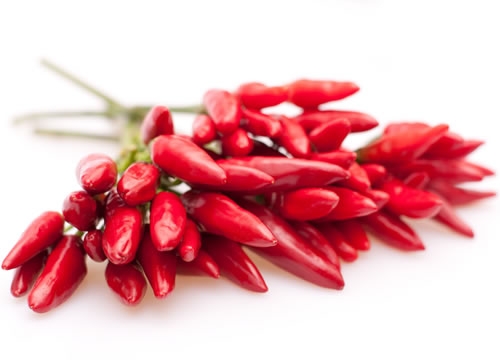 I mean really hot food? Are you a chile head? Then let’s talk hot peppers.

Chile peppers, of which there are almost 200 varieties, have been cultivated since 6200 B.C. All chile peppers get their fire from a compound called capsaicin, (kap-SAY-ih-sihn), the greatest deposits of which lie in the veins of the pepper.

Chiles are available in fresh and dried forms. A fresh chile’s dry counterpart will be somewhat hotter since dehydration intensifies the heat of the remaining substance.

Aside from the heat, chile peppers offer a distinct flavor, unequaled in the culinary world. Moreover, they are high in vitamins A and C as well as good sources of potassium, folic acid, and vitamin E.

It is advisable to wear rubber gloves while cutting them, especially the very hot ones. Capsaicin from the pepper quickly infiltrates the skin and can linger even after washing.

I learned this the hard way one day when I put my contacts in after cutting up habaneros. Yes, just imagine shoving a sharp pencil into your pupil.

There are countless hot pepper sauces on the market today. I prefer Franks, (made from cayenne peppers), and the classic Tabasco, (made from Tabasco peppers). Steer clear of the ultra hot sauces.

You can recognize them by the small bottle, the crazy name, and the price. These super hot sauces are an intensified extract of capsaicin.

They provide dangerously high heat but a relatively low flavor yield since the heat factor is not balanced by a proportionate amount of the other elements in the chile pepper. In other words, if each drop of the super-sauce equaled one jalapeno, you would get a greater depth of flavor from including five jalapenos in your dish than from five drops of the sauce.

Here’s my recipe for habanero sauce, which will provide blistering heat and satisfy all but the most masochistic fire-eaters.