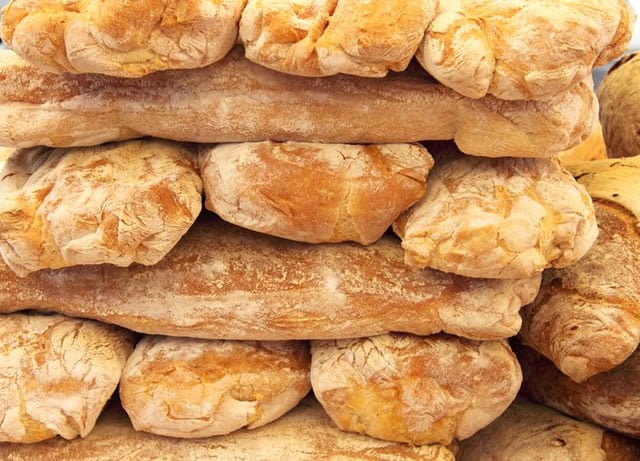 What Is The Difference Between French Bread and Italian Bread?

Both Italy and France are countries that specialize in bread making. Sure, when we sit down to eat at a restaurant in the US we are given a bread basket to start off our dinner. But bread is essential to almost every meal in Italy and France.

If bread supply ran out in either of these countries, you can expect riots in the streets. However, the two countries approach bread-making quite differently from one another.

Baguettes, focaccia, brioche— all of these breads differ vastly in size, shape, and how they are served. Regardless of differences, as Americans, we enjoy these breads on a daily basis.

If you want to know a little more about how these breads are created in their native countries and what sets them apart, take a look at what I have come up with below.

When we think of French bread, the “the French stick” usually comes to mind. It is a long, thin crusty loaf that is typically referred to as a “baguette,” which directly translates into “a stick.”

The Baguette may be the most popular type of bread in France—it is eaten throughout almost every province in the country—but it is certainly not the only kind made.

Other types of ordinary French white bread include the couronne, which is bread in the shape of a ring, or “country bread” (pain de campagne) that often incorporates whole wheat or rye flour in its ingredients.

In terms of Italian bread making, the paesanos are known to allow the yeast to fully rise over the course of a few hours, resulting in a very thin-crusted loaf. The interior of Italian bread is typically extremely moist and absorbent—the better to soak up olive oil and tomatoes from caprese.

Types of Italian bread include ciabatta— made of wheat flour and yeast—piadina, made of flour, lard and salt—and panettone, a bread that is native to Milan. Both countries make delicious loaves, but the similarities between Italian and French bread end the moment you compare the two side by side. 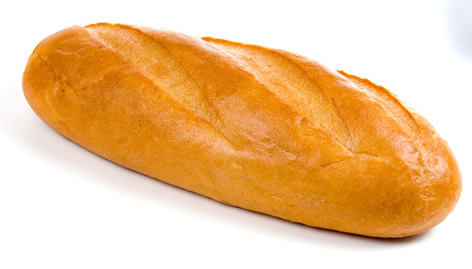 The first way to distinguish Italian from French bread is to simply eyeball the two. French and Italian breads come in all shapes and sizes. However, to broadly generalize, while French bread is long with rounded edges, Italian bread comes in a more overall circular shape.

French bread is typically baked in a long, thin shape and has become the major food symbol of the country. The baguette can be baked as long as 30 inches and is a staple in almost every region.

On the other hand, Italian bread is known to be baked in more a flat and round shape. Italian loaves are also shorter and typically thicker than their French counterparts. Although it is possible to get baguette-type looking bread in an Italian bakery, on average, most Italian bread is shaped into larger rounds.

There are endless variations in size and shape for bread in each country, but these are the major indicators that will distinguish the two.

Because bread comes with every French and Italian meal, you might think they are served for the same reasons. However, In France, breads are usually given as a starter. French brioche, a sweet bread, is even eaten in the morning with breakfast meals. The French also employ the baguette as a multipurpose bread, used for sandwiches and as the base for canapés

Italian breads, on the other hand, are usually served as a supplement to pasta or other main courses. A side dish, if you will. Italians eat bread to absorb the flavors of olive oils or the thick sauces in a rich meal.

Although there are vast differences, classic French and Italian breads are, for the most part, made with the same ingredients in a similar fashion. However, one major difference in ingredients is that bread making in France is more tightly controlled than in Italy.

By law in France, bread cannot have added oil or fat. French baguettes, for instance, must be made from water, flour, yeast and salt, with a very little amounts of dough improver allowed.

Italian bread often contains a little bit more milk, olive oil, and sometimes sugar in its contents. Thus, Italians seem to be working with wetter dough as their base than the French.

Like their pizzas, Italian breads are often baked in a flat stone oven. Pane di Genzano, for instance, is a fragrant bread from Lazio, a region located in the central peninsular section of the country, that is usually cooked in a wood-fire or stone oven. This particular style of baking gives the bread a signature smoky flavor and pungent aroma.

Conversely, the French are known for using electric convection deck ovens. This method of baking gives the loaf an overall softer texture. They bake their breads usually at the same temperatures as the Italians.

France is famous for its brioche, a sweet bread that is made with unsalted butter and eggs that are added to the dough to give it a"sugary sweet" taste. There are all types of breads in France, but typically, they make sweeter loaves than the Italians—just think of French toast!

Italy is famed for its savory breads. One in particular is focaccia, a flat oven-baked product that is similar to pizza dough in texture. Typically focaccia is topped with herbs and other savory ingredients such as olive oil or salt. Another exquisite savory Italian bread is Pane Casareccio, a popular rustic stuffed bread.

While the French usually stick to the sweets, Italians embrace the savories.

Not all French bread falls under the category of the baguette. Take a look.

Baguettes are long, thin loaves of white bread made from a basic dough. Incisions are cut into the top of the loaf to allow it to expand and give the bread its trademark appearance. As stated earlier, the dough for baguettes is defined by French law and only small variations are allowed in terms of ingredients.

Two types of baguette are generally available in France: traditional and commercial. The traditional baguette is made of only wheat flour, water, salt and yeast.

Levure yeast allows the bread to rise much faster for commercial purposes. Without additives, baguettes do not keep well because they contain no fat.

But French bread does not stop with baguettes.

In the U.S., the term "French bread" refers to a loaf of a certain shape, i.e., a long and thin stick. But outside the United States, “French bread” can refer to all different types of loaf, including, but not limited to the standard baguette.

Other types of French bread include ficelle (a small, thin baguette), or pain de campagne which is a rounded loaf containing sourdough. Each region in France has its own specialty bread, some of the most notable being fig and walnut that is characteristic of the south, and milk bread in the northern region.