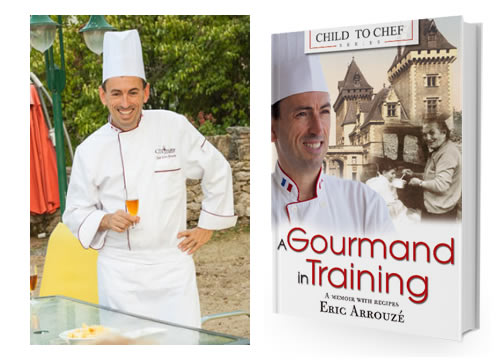 An Interview with Chef Eric Arrouze

Chef Eric Arrouze has over 30 years of experience in the kitchen working at world class restaurants in both France and Canada and he is now teaching cooking classes to future chefs as well as home cooking enthusiasts.

One of his latest culinary adventures is offering tours “from market visits to on-site vineyard wine pairing courses to cooking classes in picturesque, historic locations.”

And in his copious spare time Chef Eric has been writing his memoirs about growing up in France and the people who inspired him in his youth to become the successful chef he is. His first book is called Child to Chef - A Gourmand in Training and it takes you back to Eric’s first 16 years and the influence his grandmother Augusta had on his decision to become a chef.

Eric says about his book, “If I can inspire young adults to overcome their own challenges and live their dreams, I will consider this book a great achievement.”

Not only does A Gourmand in Training tell Chef Eric’s story about his youth, it includes a selection of recipes important to him while growing up including Mamie Augusta’s Crepes with Sugar, Dad’s Mustard Rabbit Dish, and Aunt Jeannette’s Fig Jam.  These recipes show the influence Chef Eric’s travels within France and to Spain had on his early culinary development.

Chef Arrouzé,  my first question and one you probably get asked a lot is why did you decide to write a series of books about becoming a chef?

My clients kept asking me if I had a book published, and many said that they wanted to buy my cookbook. When I teach, often a situation or an ingredient triggers a career-related memory that seems fitting to share, and my students seem to love them. They always say that I am a good storyteller, and my book is really for them.

I did not want to do just any cookbook. I have so much recipe content, pictures and videos that I could do several standard cookbooks in a very short time. No, I wanted to do something different and more personal. When about 6 years ago I decided to start writing a book, I quickly realized that it would be too big!

So I divided parts of it into the "Child to Chef" series. I am planning to create a total of 5 books in this series, and will use a portion of the proceeds of each to support booksforafrica.org

Your grandmother, Mamie, appears to have been an amazing influence on your becoming a professional chef. The stories of you cooking together show how important food was to her and how she passed that foundation to you at such a young age. If you had to choose just one lesson or concept you learned from her, what would that be?

I would say "Help yourself, and heaven will help you" from Jean de la Fontaine. Mamie was always saying that you can't wait for others to do things for you, and thus instilled a strong sense of initiative in me from a young age.

Can you describe how influential your many trips to different towns in France and other countries were to your later culinary career?

Traveling to different cities and countries has opened my mind to new cultures and food. I think if you stay too long in the same place, you stop growing and you stop learning.

Your book is filled with many delicious French recipes but also many Spanish recipes like Spanish tortilla, paprika spiced almonds, and paella of Barcelona. Can you describe the difference between these two geographical cuisines as you see them?

Hard question! For me Spaniards are way more relaxed about food than the French, who I find very serious. Going out for tapas, or "tapeo," is a way of life to meet new people and to socialize.

The French seem more inclined to share aperitifs between people they already know. French recipes seem to me to contain more ingredients, and the menus are more balanced. It other words, even despite all the butter and cream, French cuisine seems to use more vegetables and is overall healthier.

In contrast, Spanish cuisine includes a lot of fried food, rice and potatoes.

I receive many emails from young people around the world who are interested in becoming professional cooks. What advice would you give them to prepare themselves for a career in culinary arts?

As a Chef Instructor, I taught professional chef programs in both private schools with astronomic tuition's and in much more affordable public schools (VCC) with longer programs. Legitimate private culinary arts schools are there to make money first, as opposed to public colleges, which have a different mandate: to educate.

I would personally stay away from any private schools because salaries in the culinary industry are very low in North America, and I know that many of my past students are still paying their student loans.

Unless you are born wealthy, I recommend apprenticing in the best restaurant you can, or I going to a public college that offers Culinary Arts or Professional Cook programs.

While in school, I recommend working in a restaurant to gain speed and more practice. Finally, I think that aspiring professional cooks should learn some French, go to work in France for a great Chef or study for a year in a French school.

The bottom line is if you want to survive in this profession, don't start your career with huge debts; instead, work and save. Living debt-free will allow you to more quickly build your career. Learning doesn't stop at school, it's ongoing.

For example, I just came back last week from Montreal after participating in a chocolate course for professionals.

Are their books they should be reading?

What cooking skills should they be working on to get themselves ready for culinary school?

After a food safety certificate, they should focus on knife skills, and they can watch videos on my YouTube channel where I teach people how to cook http://www.youtube.com/user/911cheferic

You left France in 1993 to live and work in Canada. What was culinary scene like in Canada at the time and how did it differ from what you experienced in France?

Quebec was a big shock compared to the French Riviera, where everything you could imagine cuisine-wise already existed. Montreal’s culinary scene was getting better, and fine bakeries and pastry shops were starting to pop up.

You are now a teacher and instructor to future professional cooks as well as amateurs who just want to become better home cooks. What was the transition from being the cook to teaching someone else to cook like?

To be honest I was tired of working in professional kitchens when my friends and family did not. My salary in Vancouver was low, and the sacrifice was too high.

I was looking for a career change when I stumbled on an ad seeking a chef instructor for a private school. They were asking for so many qualifications that I thought, “Good luck finding someone like that,” and put the paper away.

However, a few days later I thought about it again and realized that I was able to answer positively to every point; I came to the conclusion that they were looking for me! So I applied and got the job. I worked there for 3 years, and it was an amazing experience.

I fell in love with teaching and found it so rewarding. I also realized that my knowledge had great value but I couldn't teach in the public system since I did not have a teaching diploma. I didn't know anything about student psychology, lesson planning or curriculum design. So I quit, went back to school, and then got a job in a public college.

For the last 13 years I have been self-employed. Among other things, I teach many different programs at UBC Continuing Studies to the public and to private clients. The experience is relaxed and fun, plus I met a lot of different, great people. I also organize culinary tours to France and Quebec City, as well as culinary classes.

What’s next on your culinary journey?

I do have some exiting plans but I can't talk about them, since they´re not official yet. For this year, I am going to offer free online cooking classes on my 911cheferic.com website, along with about 200 videos and some e-books.

I have 4 culinary travel programs scheduled, and 8 new culinary courses at the University. I also plan to practice chocolate- making, and to explore cooking with pure cocoa butter and avocado oil.

And of course I have to ask, when can we expect your second memoir to become available?

The next book is about the hardship of my apprenticeship, from 16 to 18 years old, with the narration details on how I prepared myself for my cook certificate. I hope to have the book launch sometime in October of this year.