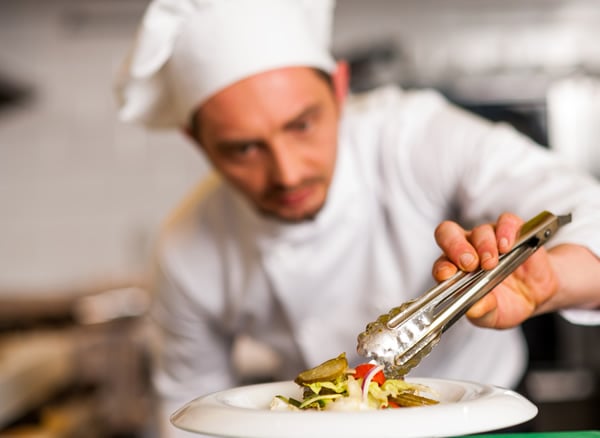 When it comes to your culinary education, the French language is going to play a big role in what you learn. Even if you’re not interested in classical French cuisine, many of the cooking techniques we rely on every day have their roots in France.

And when you consider the terms that get bandied about from your first day in class, you’ll find that the majority of them have French origins.

The reason so much of France plays a role in the culinary world is because it is the country in which fine dining became a way of life—beginning all the way back in the Middle Ages. Instead of merely sustaining the people, food in France became an entire culinary experience (at least for the wealthy). Sights, sounds, smells—all of these factors contributed to a meal, and the more elaborate and specialized, the better.

While not all modern restaurants share in this idea of a twelve-course meal, culinary schools do teach you to pay attention to more than just the flavors and techniques needed to cook food. Plating and presentation are integral parts of the culinary experience, regardless of whether you’re preparing American food or working as an entry-level pastry chef.

And because classical French culinary techniques became synonymous with a good education, French terms continue to be used and “Americanized” in the culinary world today.

Some of the French culinary terms most of us are familiar with already include:

Even if you don’t know the exact definition of the above terms, you are most likely able to make a connection between them and the foods you have eaten in the past. As you continue your culinary education, however, you’ll most likely encounter more specialized terms, as well.

In fact, many of the following specialized terms are not only used to describe types of food or techniques with French ties, but they are actually French techniques that have been perfected and passed down through the ages.

Bisque: A thick soup made with shellfish

Deglacer: To deglaze, typically done to a pan after the food has been fried within it

Frappe: Making something iced or blended with ice

Julienne: A type of knife cut used for many vegetables

Mirepoix: A mixture of vegetables (usually celery, carrots, and onions)

Ragout: A type of stew

Of course, this list isn’t exhaustive, and there are many more French terms you’ll be likely to come across as you pursue your culinary education.

Depending on where you attend school and the type of program it is, you may learn each of these terms with hands-on training, or you may simply rely on a more book-learning format in which vocab tests make up part of the curriculum.

Regardless of your program type, one things is certain—you cannot become a good chef unless you learn a number of French techniques and terms, even if you never set food in classic French kitchen.