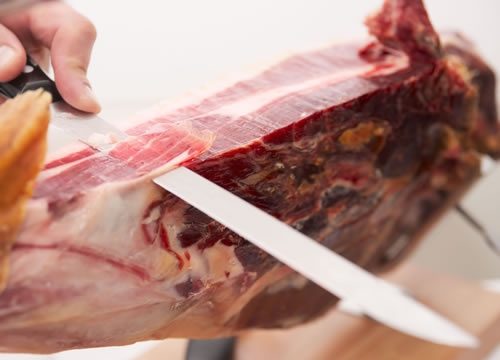 Who doesn't enjoy trying new products? One of the great advantages of being into food is there is always something new and different to try. Sometimes it's great and sometimes not so wonderful.

A while back we were going to visit some friends and I thought it might be fun to bring something different to their house to serve as an appetizer with a glass of wine. At our local Farmer's Market, I asked my friend Cheeseman Jack for a great cheese and some sort of cured meat.

Jack who you might remember turned me on to that wonderful Chabichou du Poitou cheese, that rich, soft goat's milk cheese from France. This time he said he come into some Jamon Iberico de Bellota, but it was pricey. I'm thinking it is a cured pork product, how expensive can it be. I am shocked to tell you it was $185/pound!

Being interested in trying something pork that cost that much, I was game to taste it, but I could only afford 4 paper-thin slices! It was delicious, but honestly, I am not sure that I would have been able to tell the difference between it and some good Italian prosciutto at a fraction of the price.

To be fair, I did not do a side-by-side taste comparison. After tasting Spain's finest (and most expensive) pork product, I decided to do a little research to see what I could find out about this ham. What on earth could the Spanish do to this ham to make it worth almost $200/pound? I found out some really interesting information.

The best Spanish ham, Jamon Iberico, comes from the cerdo negro, or the Black Iberian Pig. These pigs are an ancient breed whose roots can be traced back to about 1000 BC, when pigs that were brought over to the Iberian Peninsula (now Spain and Portugal) from the Eastern Mediterranean were interbred with native wild boars.

These pigs are unique in many ways. They have lots of fat deposits under the skin, and fat is also deposited between the muscle fibers. This fairly even distribution of fat interspersed with muscle helps to give a very buttery and rich flavor to the final hams. Also, these pigs are natural grazers.

Unlike most domesticated pig breeds, the Black Iberian Pig grazes about and forages for its own food - acorns.

What About the "Good Fat"

Here's the really interesting part. Because the pigs ate a diet high in monounsaturated fats from the acorns, much of the fat in the ham is oleic acid. This is a "good fat" that has been shown to lower LDL cholesterol. Imagine that?

"Bacon" that is good for your cholesterol! I can't wait to tell my friend Jeff who has this belief that there is nothing on this earth that doesn't go well with either a pork product or chocolate.

Like I said, even after doing all this research and finding out about Jamon Iberico de Bellota, I'm still not sure that I could tell the difference between it and prosciutto. I will say that Italian prosciutto and Spanish Jamon Iberico both embody the true spirit of preservation - taking something that would otherwise spoil quickly and treating it with great attention to detail to make a final product that is not only edible but incredibly delicious.

Where to Buy Jamon I berico de Bellota

True Jamon Iberico de Bellota has only been available legally in the United States since the middle of 2008. If you would like to try it for yourself, I suggest you find a gourmet specialty store that imports quality meats.

You may even be able to find it in some of the upscale supermarkets like Wegman's or Whole Foods. If not, there are plenty of resources online.