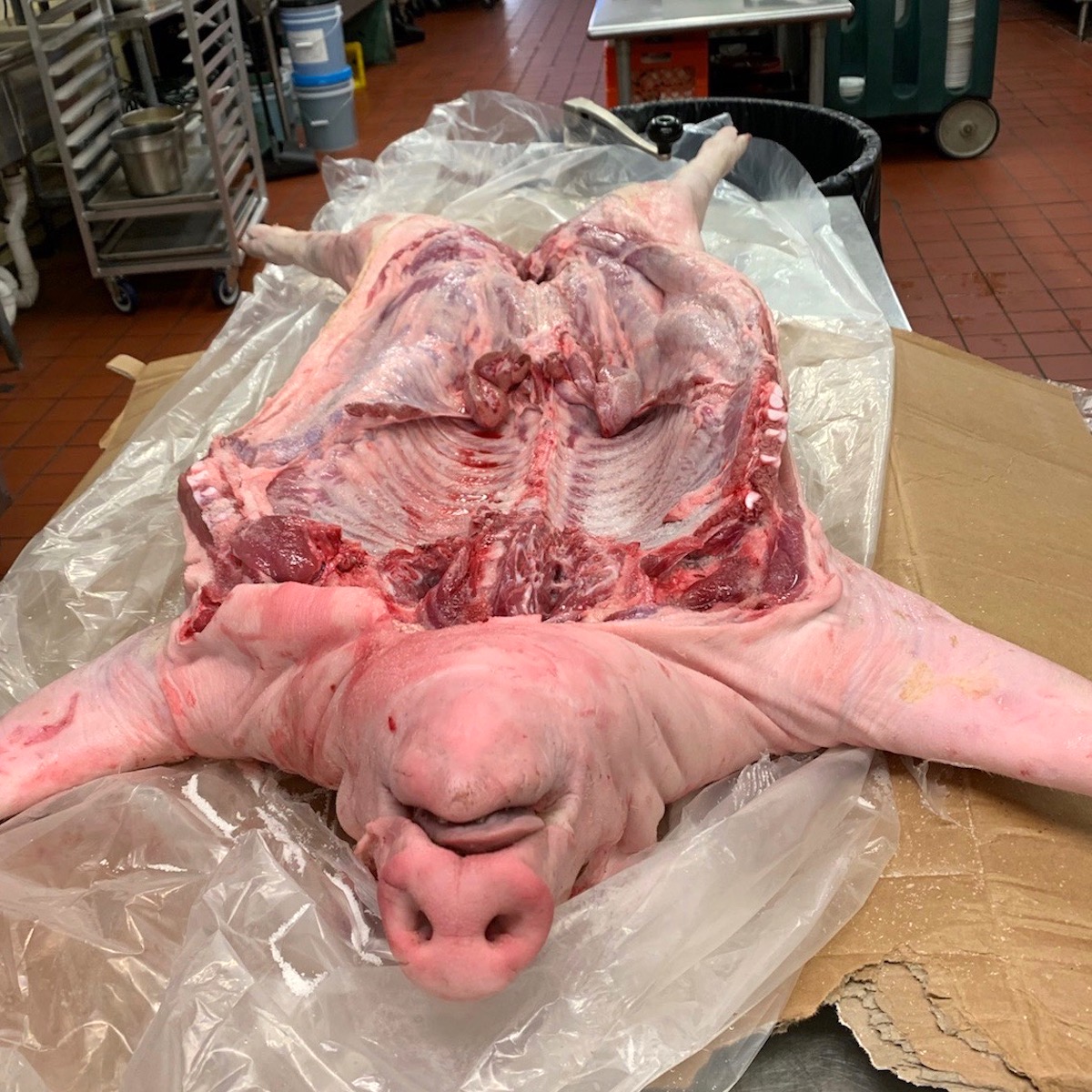 Where Do the Various Pork Cuts Come From On A Pig?

Not too long ago I found a video on YouTube from the UK college of Agriculture, Food and Environment by a butcher named Dr. Gregg Rentfrow.  In it, Dr Rentfrow showed how to fabricate an entire half a cow while describing where the various cuts came from on the different primals.

I was so blown away by the quality and the amount of information provided by this video, I shared it at Beef Fabrication Video.  Just this week I learned there is a new video from Dr. Rentfrow showing us how to fabricate a pig and where all the pork cuts come from so I watched it 5 times and had to share it with you.

Like I did in the Beef Fabrication Video, I'll walk you through some of the cuts Dr. Rentfrow makes when "breaking" down a pork carcass and where they come from. In the video, you'll learn about wholesale cuts, sub-primal cuts as well as some of the retail cuts you'll find at your market.

Dr. Rentfrow is working with a 100 pound carcass that is one half of a pig carcass. The entire carcass before being split in two weighs 200 pounds and came from a live pig weighing in at about 230 pounds. In the video he shows you how "everything is used on the pig except for the squeak".

Pigs have 13 to 16 ribs depending on the length of the pig. Dr. Rentfrow prefers to break the carcass between the 2nd and 3rd ribs to separate the shoulder from the loin saddle.

The next cuts are to remove the backbone and the jowl from the shoulder. The jowl can be cured and smoked to make jowl bacon.

What's left are the Boston Butt and Picnic cuts. The Picnic cut is not very popular in the United States but they are often cured and smoked as a picnic ham. The Boston Butt on the other hand is very popular. In Kentucky they like to pickle, then smoke this cut. I like to slow cook it in a crock pot or Dutch oven and make pulled pork. See my Braised Pork Butt with Port and Prunes

Removing the Ham from the Loin Saddle: The ham has lots of possible cuts depending on how you are going to use it. In the southeast, a popular way to prepare the ham is a process it to make a "Country Ham".

The Loin Saddle: This is where you find pork belly, loin and sirloin. The belly is where bacon comes from but first the bone has to be removed. These bones become spareribs and are best slow cooked because of the amount of connective tissue.

Making Bacon - The belly is processed (cured) and then smoked at about 125 degrees F.  When done, it comes out and is sliced and packaged as bacon.

The Loin: The most expensive cut and most popular although some may say bacon is the most popular pork product. The loin can be processed with the bone in to end up with:

You'll typically find all these chops at your local butchers or supermarkets.

The other way this loin can be broken down is by removing the bones to end up with a pork tenderloin, sirloin and boneless pork loin.

First the outer skin and fat are removed and sold for crackling, pork rinds or lard.

Next to be removed is the sirloin which can be boned for a boneless sirloin that will be cut into 1-inch chops or sirloin cutlets that are nice for grilling.

Boneless Pork Loin - Removing the rib bones and the backbone leaves you with a boneless pork loin. This can be sold as an entire pork loin or cut into 1-inch round chops.

What's left are the ribs. The backbone is removed from these ribs and you now have the baby back ribs or loin back ribs.