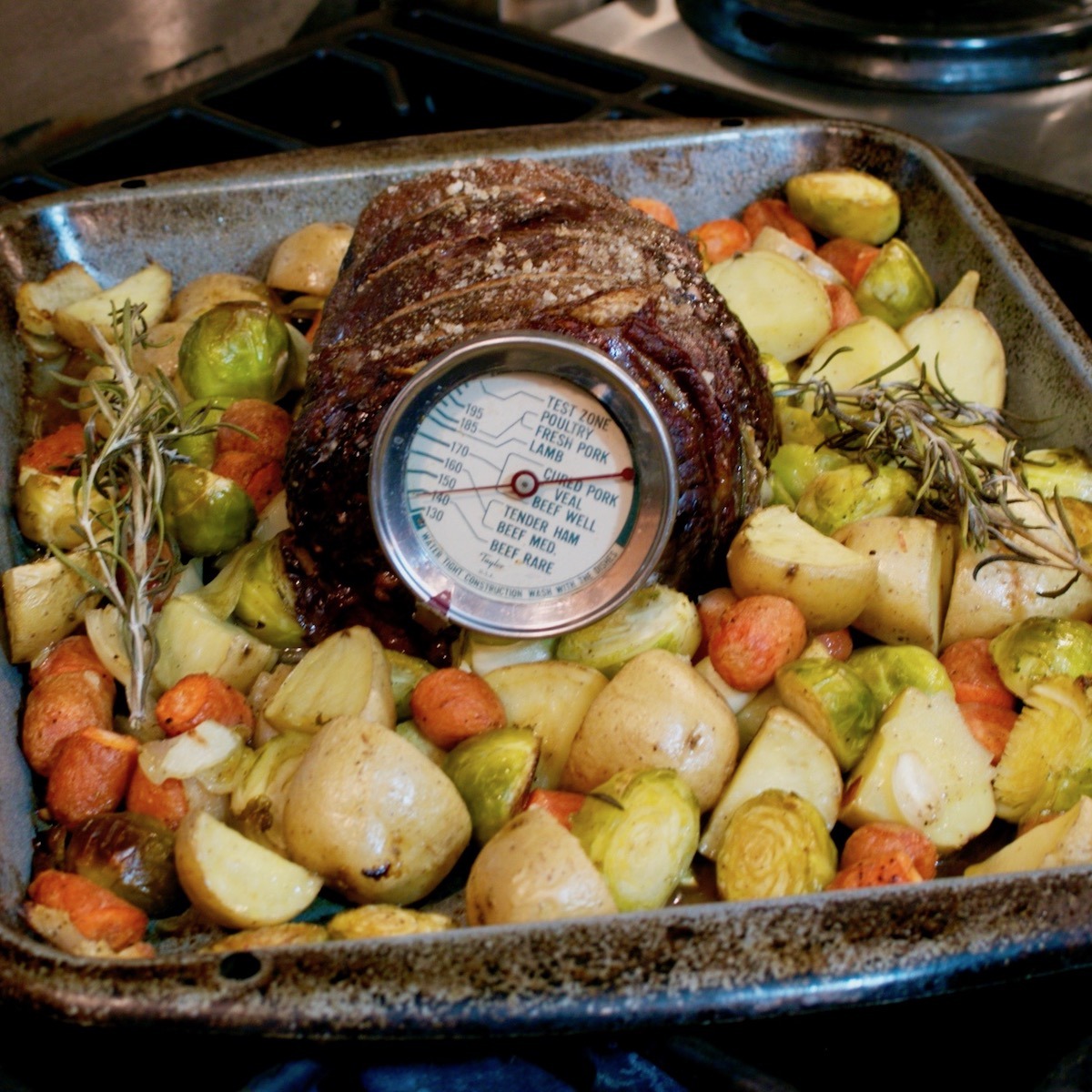 All About Roasting Meats

How to Roast Meats & Poultry

In the beginning, roasting was done on a turning spit over an open fire and the juices ran over the surface of the meat basting it continuously. Roasting technique is a dry heat cooking method every home cook will want to learn more about.

A more specific definition includes roasting in an oven, before a fire, or buried in embers or very hot sand. Think about wrapping a potato up in aluminum foil and nestling it in the dying embers of a campfire.

Since this is not a frequent scenario, most people consider roasting as cooking large pieces of solid food in an oven. This is a correct definition, as far as it goes, but it is also a very simplistic definition.

Dozens of cook books have been written on the art and nuances of roasting: to baste or not to baste, proper roasting temperature, tied or untied, brine or marinate, bone in or bone out—the list goes on and on.

Let’s take an in depth look at roasting. We’ll look at the history of roasting, equipment needed for modern roasting and what foods work well with this cooking method. Then, we’ll address some of the age-old debates.

At the end of the day, you can decide for yourself what method works best for you. Any way you slice it, though, armed with some know how and the right tools, you’ll end up with a roast you can be proud of.

A Short History of the Roasting Technique

The earliest form of cooking was probably direct heat: man drops raw meat into fire. While this cooked the food, most likely the guy ended up with black char on the outside and raw in the middle with a thin margin of “cooked” in between.

Next probably came roasting, also by accident: man leaves raw meat by the fire. The indirect heat cooked the meat more gently, albeit only in one direction - the side closest to the fire got cooked. Eventually, somebody thought of putting the meat on a stick and then turning it over the fire, and spit-roasting was born.

Spit roasting was the state of the art for hundreds of years. First, there was the boy who turned the spit, and then someone (probably one of those spit-turning boys) came up with a way to turn the spit mechanically - weights and pulleys.

For centuries, the heat source was fire that came from one direction - the hearth - and more and more elaborate methods of spit roasting were devised in order to produce an evenly cooked, moist and juicy end product.

Eventually, someone came up with a box with walls that would absorb the heat from the fire and then radiate it back at the food from all sides at once. No more spits, no more turning the food constantly over a fire. Oven roasting was born. 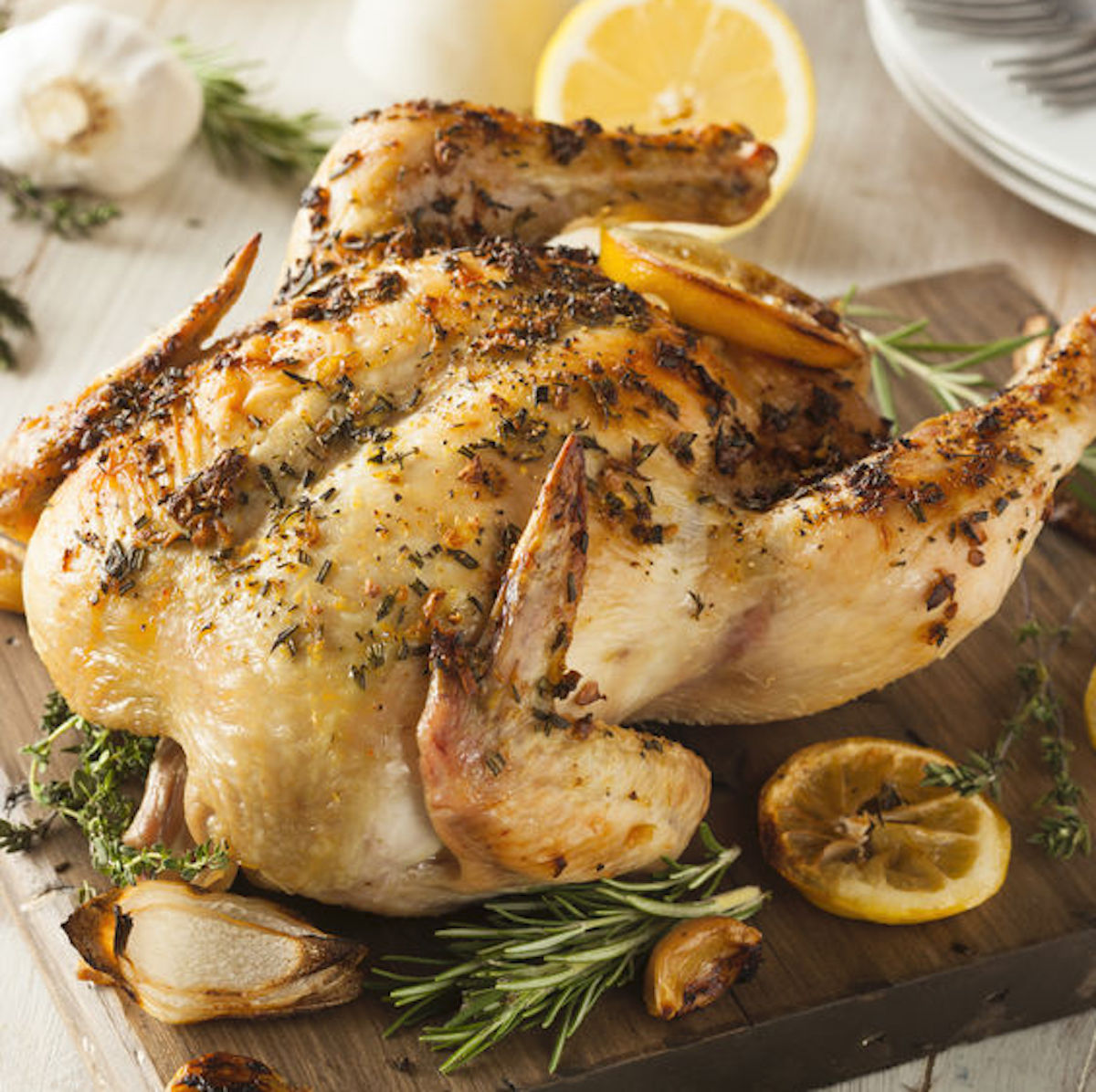 It helps to have the right roasting equipment.

Roasting was one of the earliest cooking methods because it requires very little equipment. Early roasting required either a rock in front of the fire or a stick - both readily available. If you’re not looking to go primitive, there are lots of “toys” you can buy, but all you’ll really need is

A (4th) piece of basic roasting equipment is debatable: the roasting rack. Technically, roasting foods should be “suspended” in the middle of the oven so the bottom of the meat doesn’t “stew” in its own juices in a pan or burn. Hence, the rack as a means of lifting the food off of the bottom of the pan.

Some cooks use a rack, and some do not. Some roast right on the oven rack with a pan on the rack below to catch the drippings. I often use a rack made of vegetables - long pieces of carrot and celery piled up under the roasting meat. The meat sits on the vegetables and is held off the bottom of the pan, and the vegetables add flavor as everything roasts together.

If you are going to use a metal rack, some cooks prefer flat racks, and some prefer the V shaped racks. There are also U-shaped racks and vertical roasters available (think beer can chicken). Flat rack proponents say that a flat rack allows the meat to “spread out” and roast more evenly while V shaped racks “squeeze” the meat and prevent thorough cooking.

V rack proponents say a V rack helps keep the meat in a more uniform shape so that it will cook more evenly. See what I mean about the definition of roasting being pretty simplistic? Everyone has their preferred method. Since there are pros and cons to every method, please do your research and then do what makes sense to you. 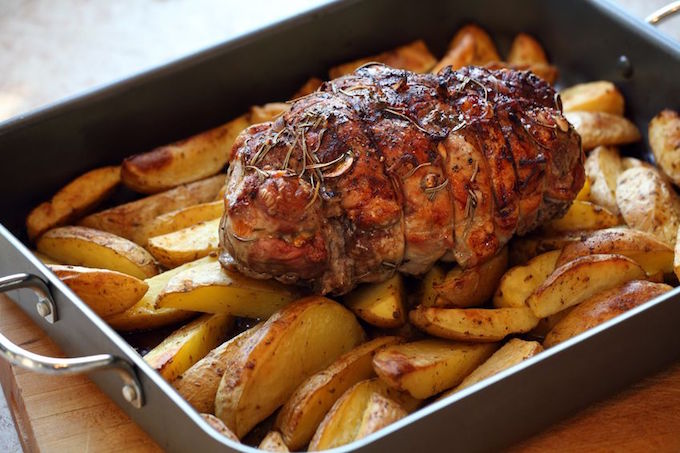 The Meat Cuts Are Important to the Roasting Technique

Roasting is a cooking technique that can be applied to a wide variety of meats, from poultry to pork, and is a fantastic choice when the goal is highlighting the flavor of the meat itself (rather than a flavorful sauce, as in a braise or a stew). There are some cuts that are not appropriate for roasting, however.

Since meat is muscle, some meats are more tender and some more tough depending on the amount of work the muscles did when the animal was alive. In general, roasting is an excellent method for cooking chickens, turkey and other fowl and leaner cuts of lamb, pork and beef. Look for these leaner cuts labeled “loin” or “rib.”

Conversely, tougher meats with a lot of connective tissue, such as brisket, chuck, round and shank, are best cooked with a moist-heat method, such as braising or stewing.

How to Keep the Roast Moist

Before a lot of emphasis was placed on leaner meats, even tender cuts of meat had a contained a lot of fat, in the form of “fat cap.” The fat cap is the thick layer of fat covering meat. On a live animal, the fat would be between the skin and the meat. In today’s market, the fat cap is trimmed before sale.

During roasting, the fat cap melts and bastes the meat, keeping it moist. With the leaner cuts of today, we need to work harder to keep the end product moist. I said it’s harder, but not impossible. There are several ways to ensure a moist product. Some are healthier than others, but all will improve ensure a juicy and flavorful end result.

Larding - Larding is actually a very old form of introducing extra fat to a cut of meat. Strips of solid fat, such as lard or bacon fat, are pulled through slits in the meat with the help of a large needle.

During roasting, the strips of fat melt: self-basting meat. Since most of the extra fat melts away during the cooking process, larded meat does not taste “fatty,” just more flavorful. Larding is an effective method of increasing juiciness, but as you can imagine, it is labor intensive.

Barding -Have you ever had a piece of filet Mignon wrapped in bacon? Well, you’ve had barded meat. Barding, a close cousin of (and rhyme to) larding, is a method of keeping roasting meats moist by draping the meat in fat, most often strips of bacon or fat back.

Brining - Brining is an effective method of keeping meats moist during roasting. In its simplest form, a brine is just a salt and water solution, but you can introduce all sorts of additional flavors in the form of herbs, spices and aromatics.

Brining works through osmosis to introduce salt and other flavors into the meat. Once in the cells of the meat, the salt causes partial denaturing and coagulation of the proteins in the meat.

This coagulation keeps the moisture in the cells, preventing drying out. Most of us think about turkeys when we think of brining, but any lean cut of meat can be brined to add moisture and flavor.

Marinating - A marinade is usually a flavorful steeping liquid that contains an acid (vinegar, wine, lemon juice, etc). The acid helps to break down some of the outside tissues to break down and hold more liquid. This can make a more flavorful end product. Marinades tend to work just on the surface of foods, so they are not very effective in flavoring large cuts although they can work wonders on smaller cuts of meats. Consider a marinade for a smaller cut that you want to pan roast.

Basting - When you baste, you are bathing the outside of the meat with butter, pan drippings or a flavorful sauce during the cooking process. While this can help to keep the roast moist, it also lowers the cooking temperature in the oven when you open it. If you choose to baste, do it quickly and give the oven enough time to come back to temperature between bastings.

Because there are so many variables to roasting such as:

The "Remove" temperature on the left is the target temperature to remove from heat source.

These temperatures are all Fahrenheit.

* A big turkey can take 60 minutes of resting with a temperature shift of 20º or more.

« How to Braise Everything
Poaching Eggs, Meat, Chicken, Fish and Vegetables »