How to Make the Best Smashed Potatoes

When I was a kid, a popular discussion topic was, “If you were marooned on a desert island and could only have one ______ (fill in a category here), what would it be?”

When the category was “food” my pick was always (and probably still is) the potato.  Of course in my childhood vision of desert island life, there were all the fixin’s as well, like butter, sour cream, and chives.

And probably some onions for hash browns.  And maybe half and half or cream for mashed.  You get the picture.

Needless to say, I am a potato person.  That’s one of the reasons I readily embraced the “Whole 30” diet a couple of years ago, because potatoes are allowed, and not just sweet potatoes.

When we make potatoes of any kind, we tend to make extra so we can repurpose them for breakfast: think roasted potatoes with poached egg on top.  Yum.

Tangentially,  one of the many cool things we learned when we traveled to Peru six years ago was that there are around 4,000 varieties of potatoes, many of them readily available in the open-air markets in Lima, Cusco, etc.  The displays of potatoes were of artistic construction, each row perfectly stacked with due consideration given to the rainbow of potato colors. 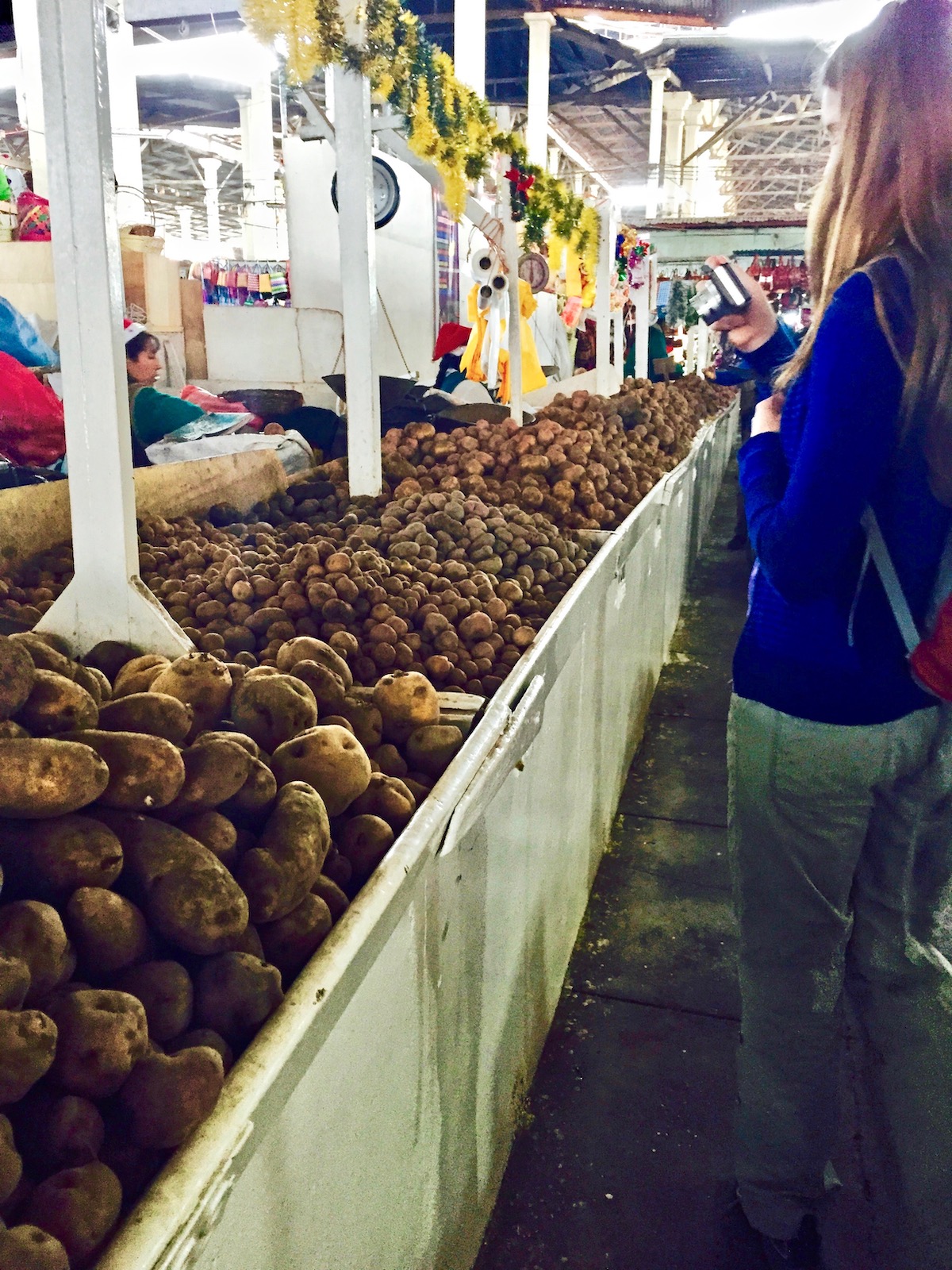 When we were there we ate Causa, a popular Peruvian dish thus named when the natives were fighting the Spaniards and the only food available was potato.  The soldiers got sick of it but their leaders urged them to eat the potatoes “for the cause!”

Hence, causa.  At least that’s the story our fabulous guide Alejandro shared with us.

A Request For Smashed Potatoes

By the time our kids left home for college, I figured I had served them every possible potato dish known to humankind.  But as with so many things, once you unleash your kids into the world, they bring back all sorts of new ideas, even regarding potatoes.  When my daughter came home for the holidays this year, she had a hankering for “smashed” potatoes.

Though she never had this at our house, because I had never heard of it, I nonetheless had a clear notion of what it must be, along with a lack of curiosity to inquire further.  So I conjured up a “smashed” potato dish that, much to my daughter’s chagrin, bore no resemblance to what she had in mind.  So much for trying to please…..

When she returned a few weeks ago,  we mutually decided to give it another try and this time we partnered as she walked me through it step by step.  And by step, I mean maybe four main steps.

No biggie, and REALLY worthy of the aforementioned hankering.  Super easy, super delicious, and pretty much would go with anything.  (We had ours with lobster rolls – think “variation-on-a-french-fry-theme.”)

Here’s what we did:  we pulled as many potatoes out of the drawer as we thought we would eat, plus a few more for that poached egg breakfast referenced above.  For us, that was three medium potatoes per person.  We had Yukon Golds in our drawer but you could use pretty much any variety.

After cleaning them to get the dirt off the skins and the eyes off the potatoes, we put them in a pot, covered them with water, and set them on the stove to boil.

We added more salt than usual to the pot.  I have a salt cellar right next to the stove with a small wooden spoon that approximates half a teaspoon;  I think I added about 4 or 5 heaping spoonfuls to the water.

We brought the pot to a boil and cooked the potatoes for about 10 minutes until we could just pierce them with a fork without breaking them apart – so, short of what you might like for mashed potatoes.  Boiling time will depend on the size of the potato; if you’re using fingerlings, for example, it won’t take as long.

And remember, leave the skins on.   Then we drained them and let them cool for just a few minutes.

The boiled, skin-on potatoes went right onto an ungreased cookie sheet.  Then my daughter proceeded to smash them one by one with a flat meat pounder, and by smash I mean to apply constant pressure until the individual potato is flat and pancake shaped, about ¼ inch thick. 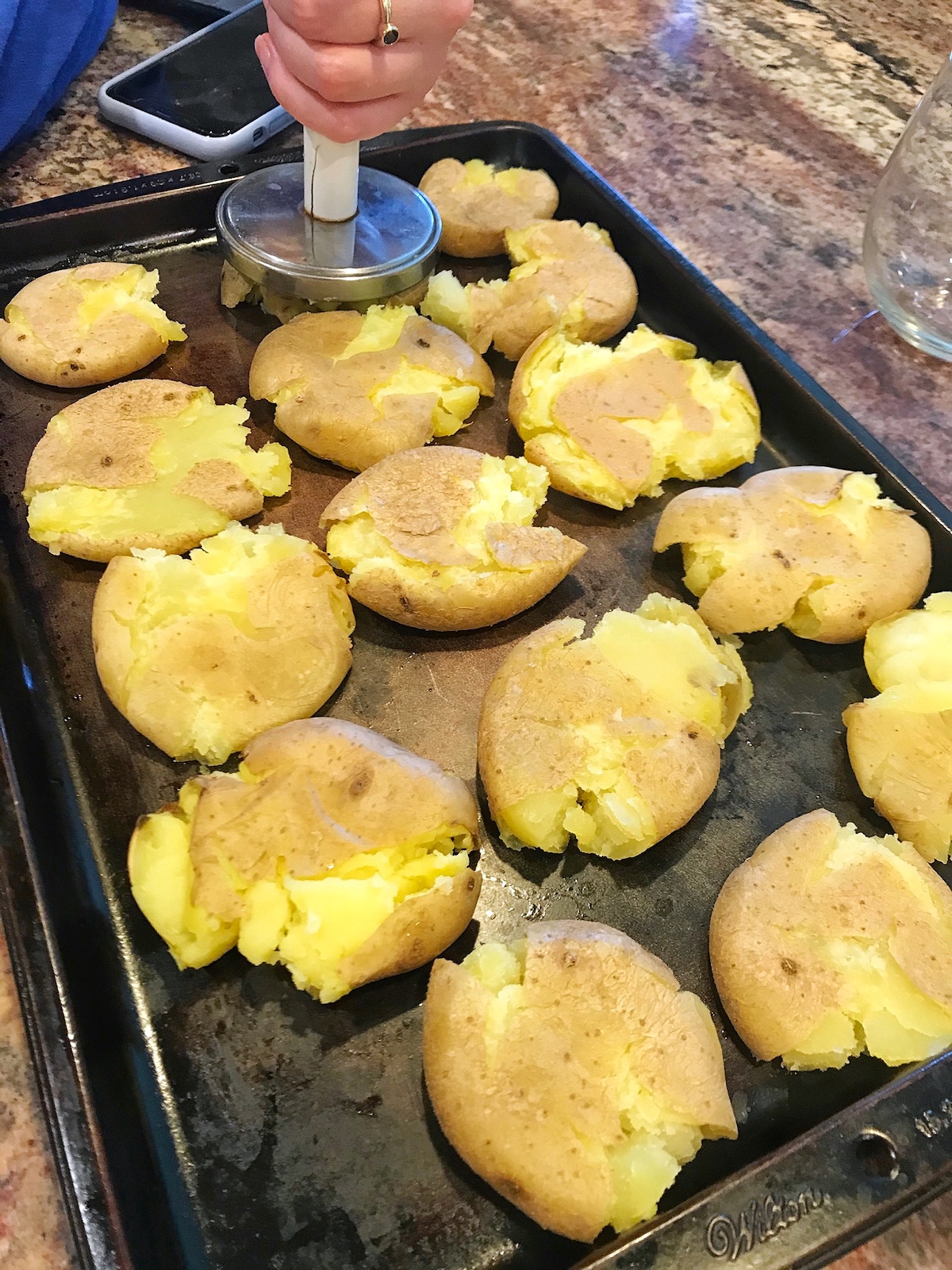 You can use anything that’s flat that you can easily apply pressure to, like the bottom of a small saucepan or even another baking sheet (in which case you’d be smashing several at once).  When all the potatoes were smashed, it sort of looked like a tray of cookies.

We then drizzled olive oil over the potatoes and stuck them in a 450°F oven (yes, 450°F, you read that right), for 35-40 minutes.  We opted not to add any more salt to the potatoes because the water was so heavily salted, but that’s just a preference.

We served them immediately and WOW were they surprisingly good – something short of a potato chip and not quite a French fry but a potato delight all its own.  I’d even serve these at a dinner party.

In fact, you can prep this dish through the smashing and then refrigerate them until about an hour before serving - just drizzle the oil and pop them in the preheated oven.  We all loved our share and enjoyed the intentional leftovers the next morning.

Despite having made this just once, I can honestly say it has risen to the status of “go-to.”  Give it a shot and let us know what you think.