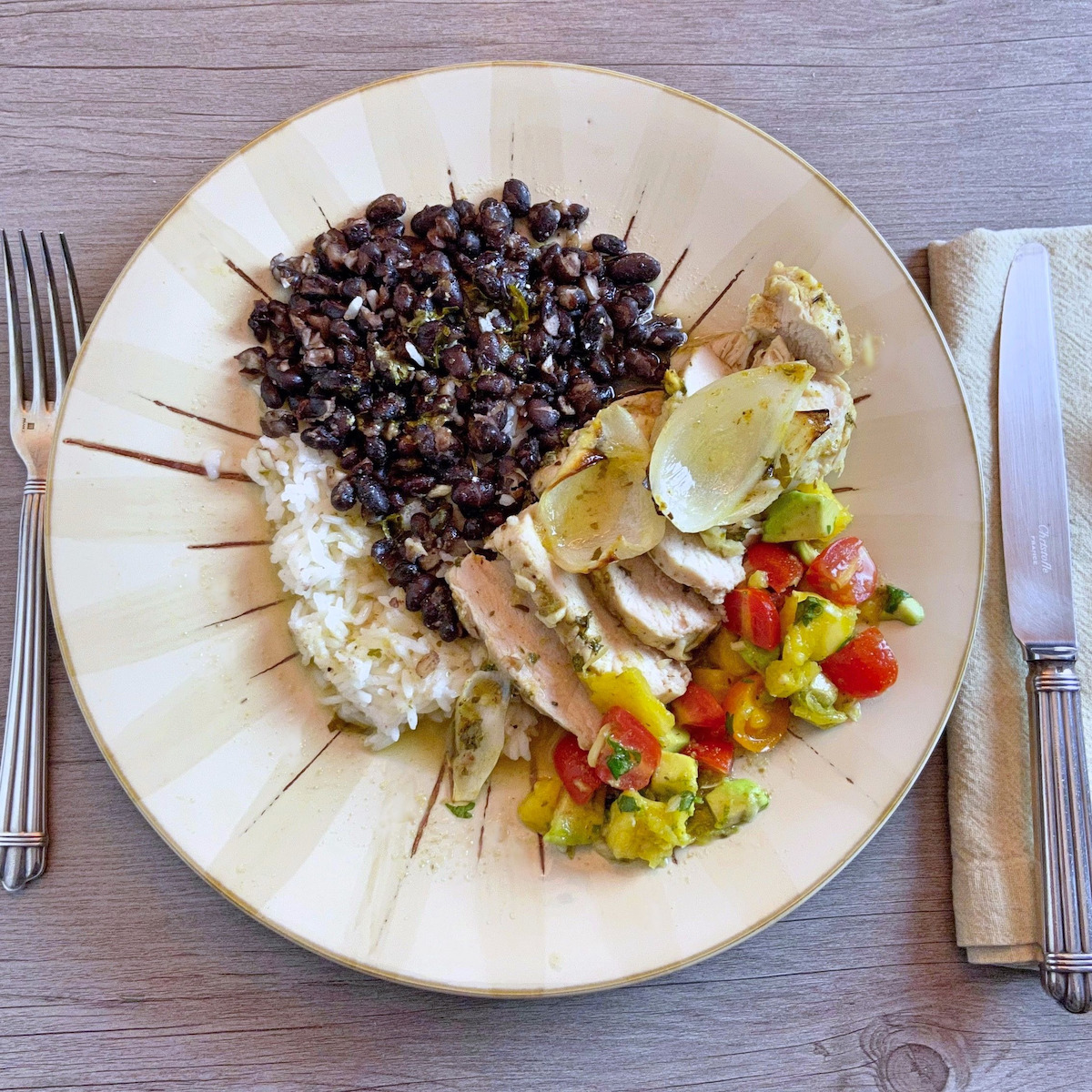 In the days before I flew to Southern California to pack up my daughter to return home from college mid-semester, she and I were back and forth on the phone multiple times getting ourselves organized.  During one of these calls, she implored me to stock up on rice and beans.

Hmmmm, interesting, since these are not traditional staples in our household, but more of buy-when-you-need ingredients.  Nonetheless, I followed up on her request assuming she had a purpose in mind.  She did.

It turns out one of her favorite selections in the dining hall at college is a Cuban-style chicken dish and she was determined to replicate it.  She found a few recipes that seemed similar to what she enjoyed at Pomona, so we sort of cobbled them together and produced a really delicious meal that took some planning but wasn’t a lot of work.

There are four main components to this meal:  chicken, rice, beans, and salsa.  The chicken and salsa are the “requires planning” parts, since the chicken needs to be marinated for at least a few hours before cooking if not overnight.  So we’ll start there.

The recipes we looked at used every different chicken piece, some with skin, some boneless, the whole spectrum.  So we went with what we had defrosted, which was three boneless, skinless chicken breasts.

(By the way, with the rice and beans, we could have used just two chicken breasts and had plenty for the three of us.)

We pulled out the blender and combined orange juice, lime juice, lime zest, garlic, olive oil, cumin, oregano (we have this in our garden and used fresh but dried is fine) and cilantro for the marinade and set some aside for the salsa.

One note about the cilantro: both of our daughter’s dislike cilantro because they think it smells like a bug that invades our neighborhood each spring.  When squished, the bug smells just like cilantro.

The girls call them stink bugs, but I don’t mind the “stink” personally.  Anyway, as a result, we typically leave cilantro out of our cooking and just have it on hand for garnishing but Maddie insisted that it was integral to this dish and that she would power through.  In went the cilantro.

We put the chicken in a baking dish – one of my favorite pieces of Polish pottery -- that could go directly from the refrigerator to the oven.  We threw in some onion sections and pepper strips just for fun.  We poured the marinade over the breasts, covered with plastic wrap, and stuck them in the refrigerator for the afternoon.

Our fruity marinade seemed compatible with the rest of our salsa ingredients so we used some of that as the basis for building the salsa, rather than relying on lemon or lime juice and oil.  To the marinade, we added a little bit of minced ginger along with chopped up pieces of cherry tomatoes and avocado.

We had just bought a pineapple so we cut that up and threw a handful of small chunks into the mix and gave it a decisive stir.  Then we covered and put into the fridge. 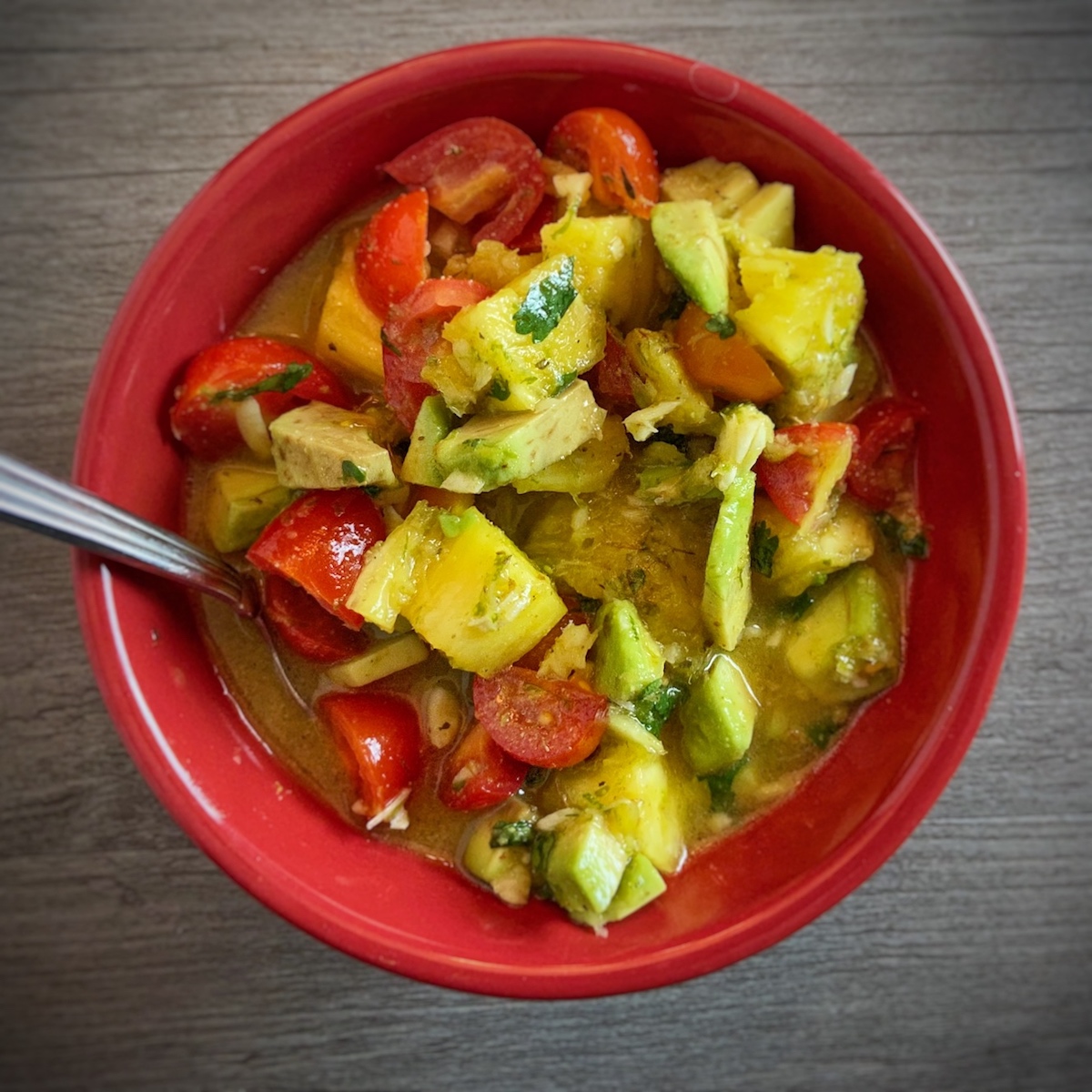 The Rice and Beans

Rice & beans is a dish unto itself.  Since we were serving these as a side rather than the main dish, we decided we didn’t need to do anything fancy.  We just steamed the rice and sautéed the beans with a little bit of garlic and onion, adding a splash of chicken broth toward the end.

If we had used canned beans, we probably wouldn’t have needed the broth.  You can used either canned or dried beans depending on preference and time.  I prefer dried because there is not the added sugar you find in many canned beans; of course, dried beans require soaking and then boiling so you have to plan ahead.

An hour before we wanted to eat, we preheated the oven to 350°F, removed the chicken from the fridge, and removed the wrap from the chicken.  When the oven was ready, the chicken went in for 45 minutes until the internal temperature was about 165°F.

While that was cooking, we pulled out the rice steamer – the most important plug-in in our pantry IMHO – and got the rice started.  We sautéed onion and garlic in olive oil and after about 2 minutes threw in the beans plus salt and pepper to taste.

When the chicken was ready, we served up the rice and beans, sliced the breasts and placed atop the R&B combo, and topped with the salsa.  AMAZING.

Here are the recipes we’ve cobbled together; you should feel free to add, subtract, substitute, etc. based on personal preference. 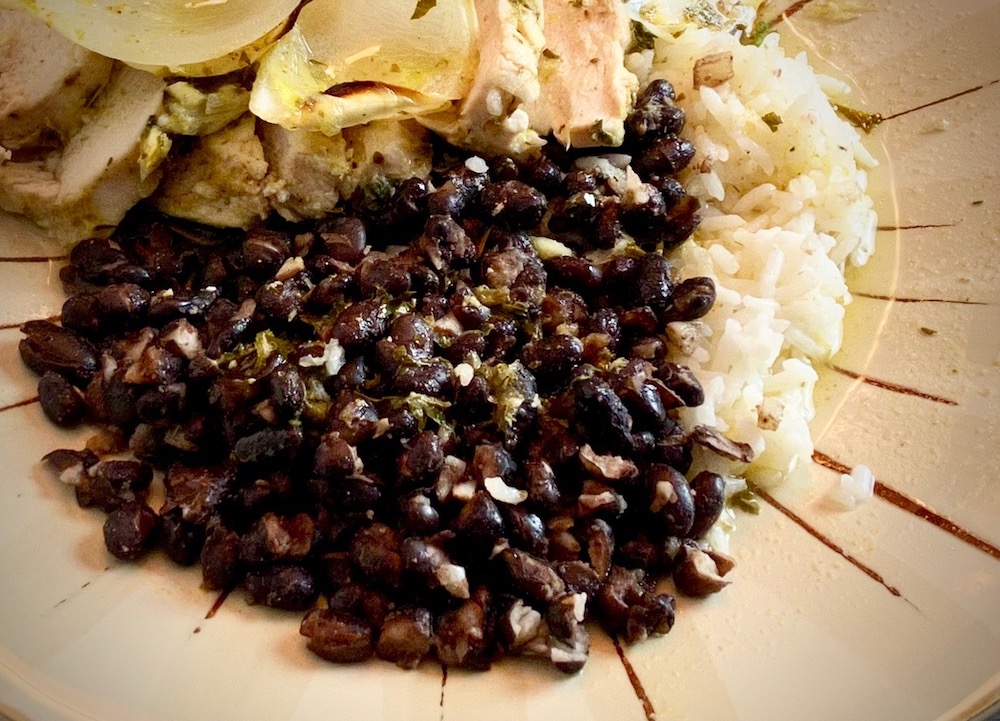 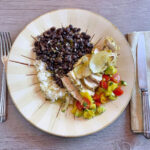 SoCal Chicken with Rice and Beans

While it may be a poor substitute for dining with friends in the campus dining hall in Southern California, planning, prepping, cooking, and eating this meal together brought a smile to her face – and to ours!  And that’s why it’s worthwhile having rice and beans in the pantry.