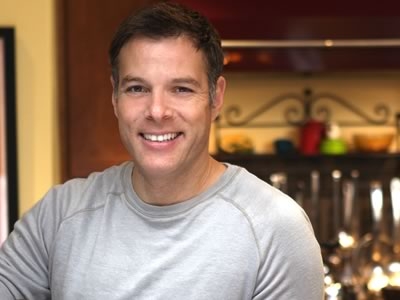 Joey Altman began training to be a chef at the tender ripe age of 16. In 1989 he opened Miss Pearl's Jam House in San Francisco where he received many stars for his tropical dishes inspired by Caribbean, Cajun, Creole and Pacific Rim cuisine.

Joey graduated culinary school from Sullivan County Community college in the Catskils where he grew up. He traveled to France to train under Chef Bernard Constantin of the Hotel Larivoire and then moved on to Boston where he worked for Chef Bob Kincaide at the Harvest restaurant in Cambridge. By 1985 he was leaving in New Orleans and working with Emeril Lagasse at Commander's Palace.

He had a TV stint with the Food Netork's series Appetite for Adventure and Tasting Nampa. He is launching a new series called What Cooking with Joey Caltman on Shop at Home TV.

I really appreciate his time and joining my site with his interview.

Joey, did you cook growing up?

Before you turned pro, did you think that's what you would be doing?

And if not, what did you think you would be doing?

I wanted to be a magician, a stunt man, musician or an actor.

What was it that got you into cooking?

Summer job at a local restaurant.

Where were you trained?

Sullivan County Community College. Two restaurants in Lyon and Brittany France, The Harvest in Cambridge, MA; Commander's Palace in New Orleans, Stars, San Francisco and Created Miss Pearl's Jam House in San Francisco. I have Been the chef at the Palace in Silicon Valley for the last three and half years.

How difficult was your training?

In a New York Minute.

Cook! Experiment, take risks, read, TASTE everything and try to create a balance. Cooking is similar to playing music in that tastes are made up of many "notes".

Think of your palate as a graphic equalizer and you're trying to achieve a balance of bass, mid-range and treble. Veal stock would be bass note, tomato and herbs would be a mid-range flavor and then wine, salt or lemon juice would be treble or the high notes.

When you turn the treble down on your stereo you hear a muddy muffled sound but kick in the high end and everything seems to fall in to place. Well the same goes with cooking. Without any salt or acid in food it taste bland or flat. But add a little bit of salt and lime juice to a salsa for instance and it comes alive with zing. Even the flavor of the other ingredients, like the tomatoes and cilantro, come through more clearly.

When I spilled every sauce and stock in the big reach-in freezer in France and wound up sitting in a big mess while the waiters just stood there looking on cracking up. Of course it was only funny years later.

Thanks for the interview - RG