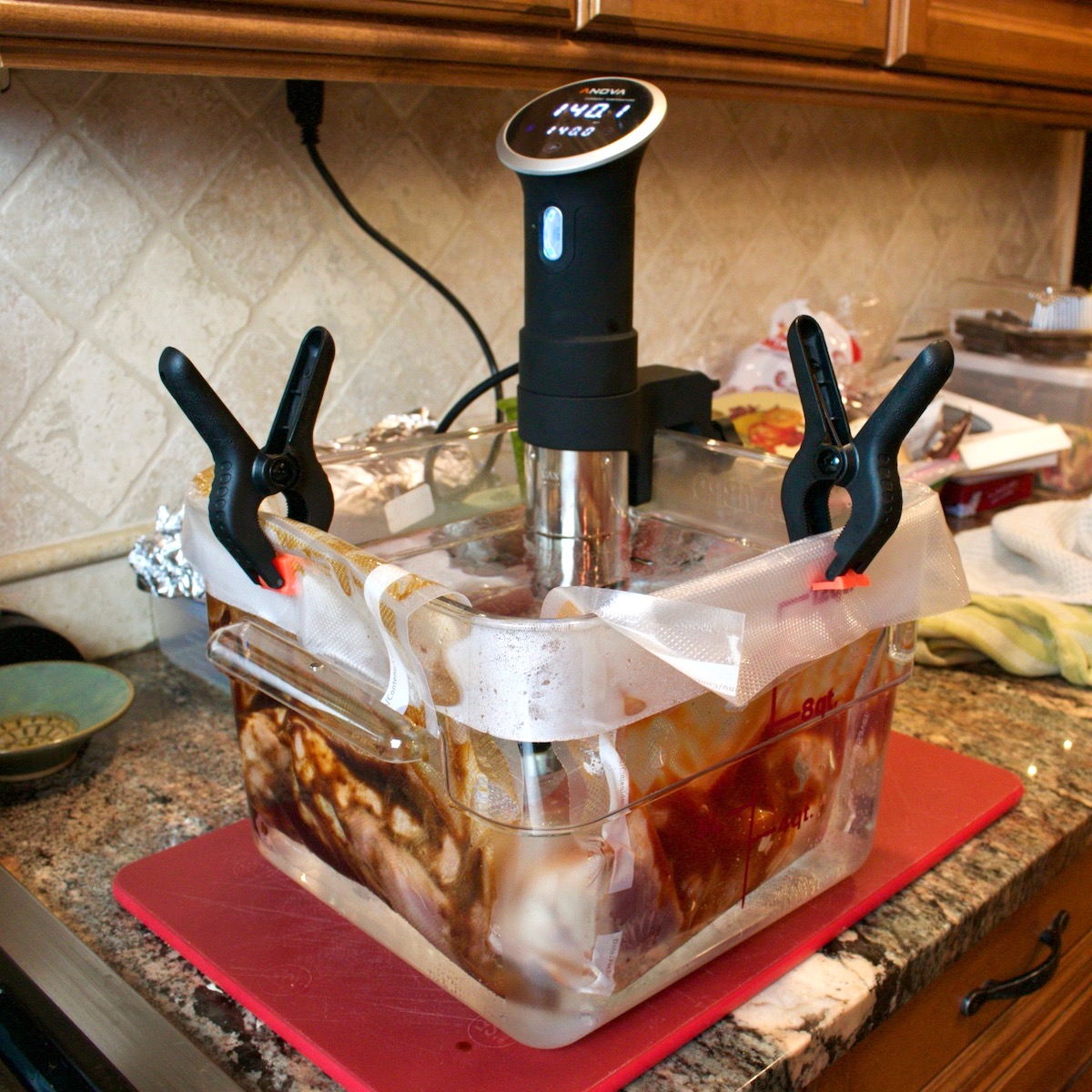 If like me you've been reading about sous vide everywhere you look and hear all the exotic tales associated with this new age cooking technique but didn't think it was for you, I want to share with you my very own personal experiences with this cooking technique.

I can assure you I was very skeptical when Chef David Nelson encouraged me to go out and buy an Anova Precision Cooker and Searzall Burner but after just a few "experimental" test dishes, I'm hooked and can't wait to learn more about this technique and practice working with it.

What Is Sous Vide Cooking?

In French, sous vide means "under vacuum" and is one of the steps required for this technique, but it is really more about temperature control. Basically, you vacuum seal ingredients in plastic bags, submerge them in water and cook the ingredients at "precisely controlled temperatures" for a specific amount of time.

What temperature and for how long varies from chef to chef depending on the ingredient but they typically range from 125°F to 140°F. These temperatures are much lower than you would cook something on a grill or roast in an oven so it's important to cook these ingredients for the proper amount of time.

I am not a food scientist so I will not try to explain the science behind sous vide or talk about the safety issues associated with it, but rather explain my own personal experiences with this amazing cooking technique and the results I've enjoyed with my first few attempts. There is a lot of great information on the Internet for those interested in learning more about the science and I encourage you to seek them out.

What Are My Initial Reactions to Cooking Sous Vide?

In one word, AMAZING!!! As you will see below, everything I tried cooking turned out better than expected. When you sous vide a piece of meat at a specific temperature, the entire cut is cooked exactly at that temperature from top to bottom, side to side.

Chicken breasts, which often dry out in the oven or on a grill, are moist and tender. Lobster cooked with a little butter in the bag is incredible.

Because you are not exposing ingredients to high temperatures, they retain more of their moisture. And the textures have been perfect so far. I have many more meals to cook to confirm these initial findings but from what I read and hear from other cooks, I'm sure they will be the same.

Although the sous vide technique will cook ingredients to perfection, they may not look so good without a little help. A steak cooked in a vacuum bag in pot of water may be perfectly cooked inside but on the outside look like a gray, unappetizing chunk of meat.

To fix this, all you need to do is brown the steak for a minute on each side in a hot frying pan, on the grill or with a fun little device called a Searzall. 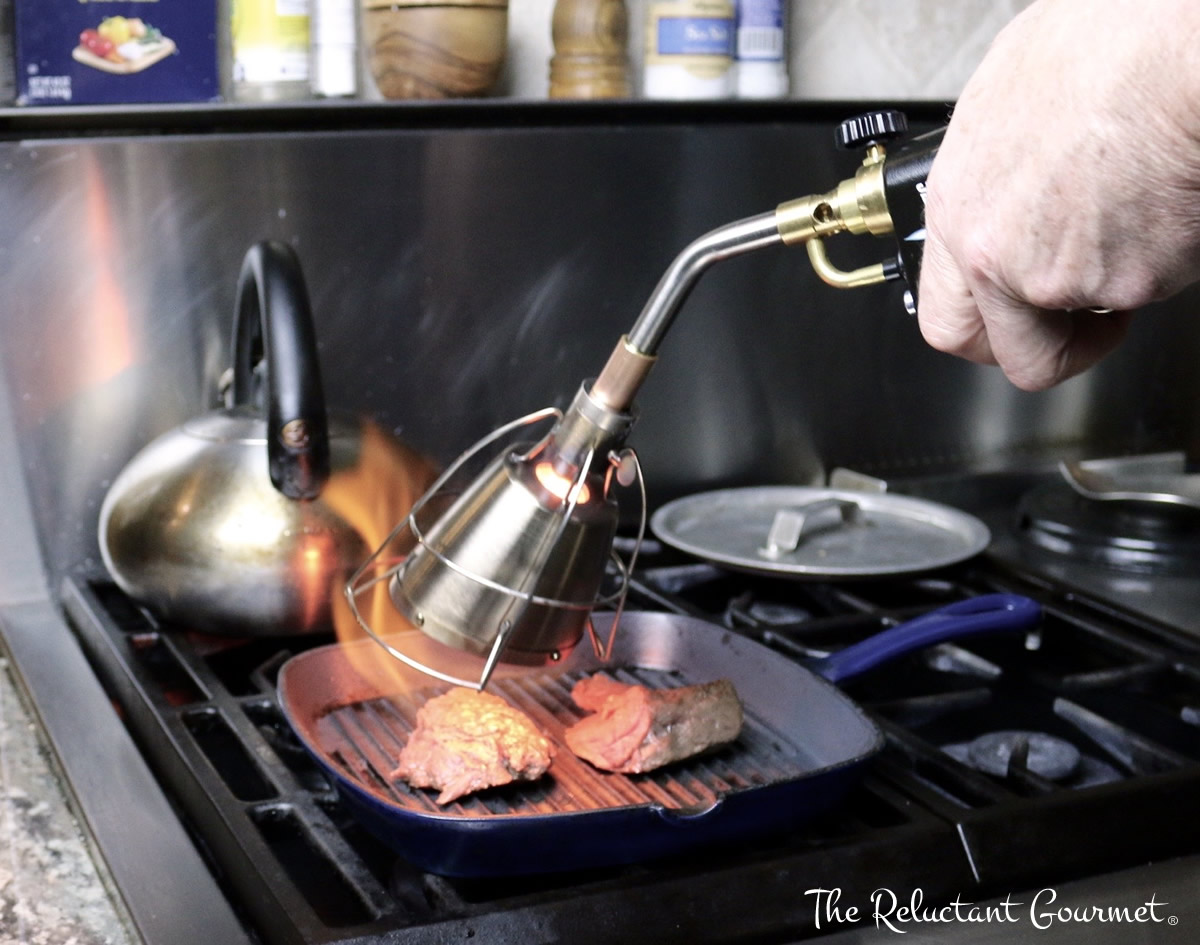 Basically a blowtorch attachment with two screens and a large head to diffuse the heat coming from a standard propane burner. Created by Dave Arnold from Booker and Dax food lab, the Searzall is perfect for searing the outside of a steak or chicken breast without changing the internal temperature after cooking it sous vide.

I have to admit I was a little intimidated when I first tried my newly arrived Searzall but after a few attempts using it, I was much more comfortable. It's a great toy for those of us who love kitchen gadgets. I'll be using it more and more as the local Philly temperatures finally drop down and I don't want to stand outside in the cold at the grill to sear my sous vide steaks and chicken.

As soon as I received my Anova Precision Cooker aka sous vide equipment, I wanted to give it a try. We had some shrimp defrosting in the refrigerator for that night's shrimp risotto so I grabbed eight of them and sealed them up in a Foodsaver vacuum sealed bag with some Soy Vay sauce.

After doing a little search online, I came up with a temperature of 149°F for 15 minutes. When they were done, I removed bag from the water, cut it open, and transferred the shrimp to a cast iron pan. There I dried them off with a paper towel and gave them a blast sear from my new Searzall.

The shrimp were incredible!  I cooked them with the shells on and next time I would remove the shells first but the texture was perfect, they were firm but moist and not at all overcooked like shrimp often are when grilled or sauteed.

Personally, I don't think shrimp have that much flavor to start with and are more of a conduit for cocktail sauce or any other sauce you stick them in. I'm sure that's because I'm not getting fresh shrimp right from the ocean but very few people are. Almost all the shrimp you buy at the market, even the shrimp that says "fresh" was previously frozen.

Anyway, the kids tried these shrimp as did my wife and the group response was very favorable. Not bad for my first attempt.

Next Up Was Sous Vide Beef 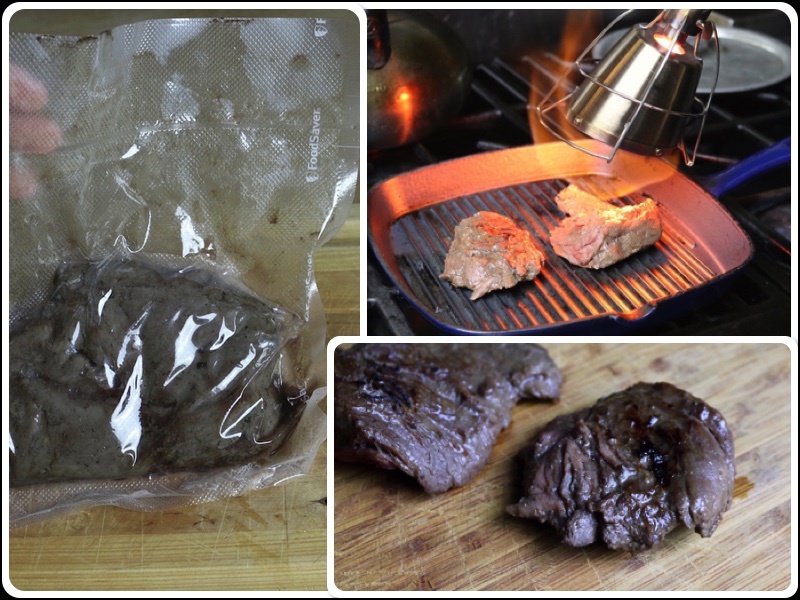 One of my favorite commercial beef products is Teriyaki Marinated Beef Sirloin Steak Tips from Wegmans. You get three tips in the package, they are easy to cook on the grill and the kids love them. What more can I ask?

I thought the steak tips would be a perfect choice to test sous vide. The beef is already marinaded and ready to go. I wasn't sure about using the package the tips came in so I transferred them to a vacumn seal bag with all the marinade and sucked all the air out.

After a quick look see on the Internet for time and temperature, I decided to go with 130°F for 2 ½ hours. After doing some more reading on sous vide cooking, I realize I didn't need to cook them that long and 45 minutes to 1 hour would have been enough.

I used my Searzall to brown one of the tips and the results were better than I expected. The meat was moist, the texture perfect especially where I hit it with the Searzall.  The meat didn't dry out at all and every bite was wonderfully moist.

I saved the other two tips for my daughter's dinner. For their beef I threw them on a hot grill for a couple of minutes to heat them up and brown them up a little. Again, great flavor, texture and moisture. The only problem was there were no seconds. 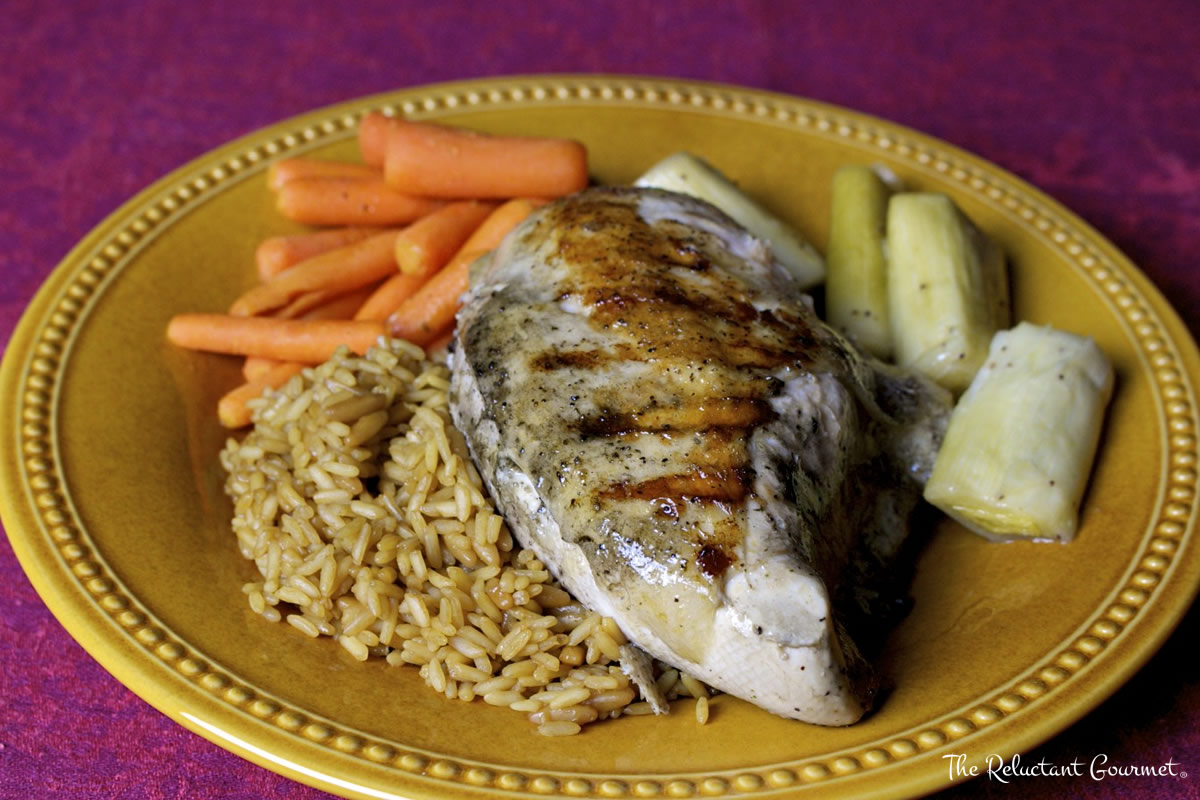 For my next attempt at sous vide cooking I thought I would try some bone-in, skin-on chicken breasts using a recipe I found on the Internet along with some carrots and leeks I had in the refrigerator. The chicken recipe only called for salt & pepper, optional fresh herbs and optional lemon slices. I used some fresh parsley and the lemon slices.

My problem with today's supermarket chicken is it doesn't have much flavor especially compared to the free range chickens I purchase at the outdoor farmer's market. So it's really important to find a way to add extra flavor to the chicken so it doesn't come out bland like mine did this time.

I suppose I could have made a sauce but I like my What I Cooked For Dinner Facebook Group friend Sharon suggested, "I find rubs and spices work really well with any of the meat in the Anova."

Next time I will try a rub and see if that makes a difference. I would also use boneless, skinless chicken breasts. Why? Because you don't need the bone to keep the breasts moist and tender. You loose very little liquid when cooking this way.

I would go skinless because I think it would be easier to brown the meat without the skin although a Searzall, grill or fry pan do a very good job - it just takes longer with the skin on.

I cooked the chicken breasts at 150°F for 1 hour and the meat was perfectly moist and tender with an incredible texture. I finished them on the grill to brown the exteriors.

The carrots and leeks cooked separately using some salad dressing and maple syrup for a marinade. You would think veggies would cook faster than meats in sous vide but that was not the case here. The leeks cooked at 184°F for 1 hour and were just OK. I should have sliced them thinner.

The carrots were cooked in maple syrup and salt & pepper at 180°F for 45 minutes. I thought they were a little too firm. After doing a little more research, next time I will cook them at 185°F for an hour and see if that makes a difference. 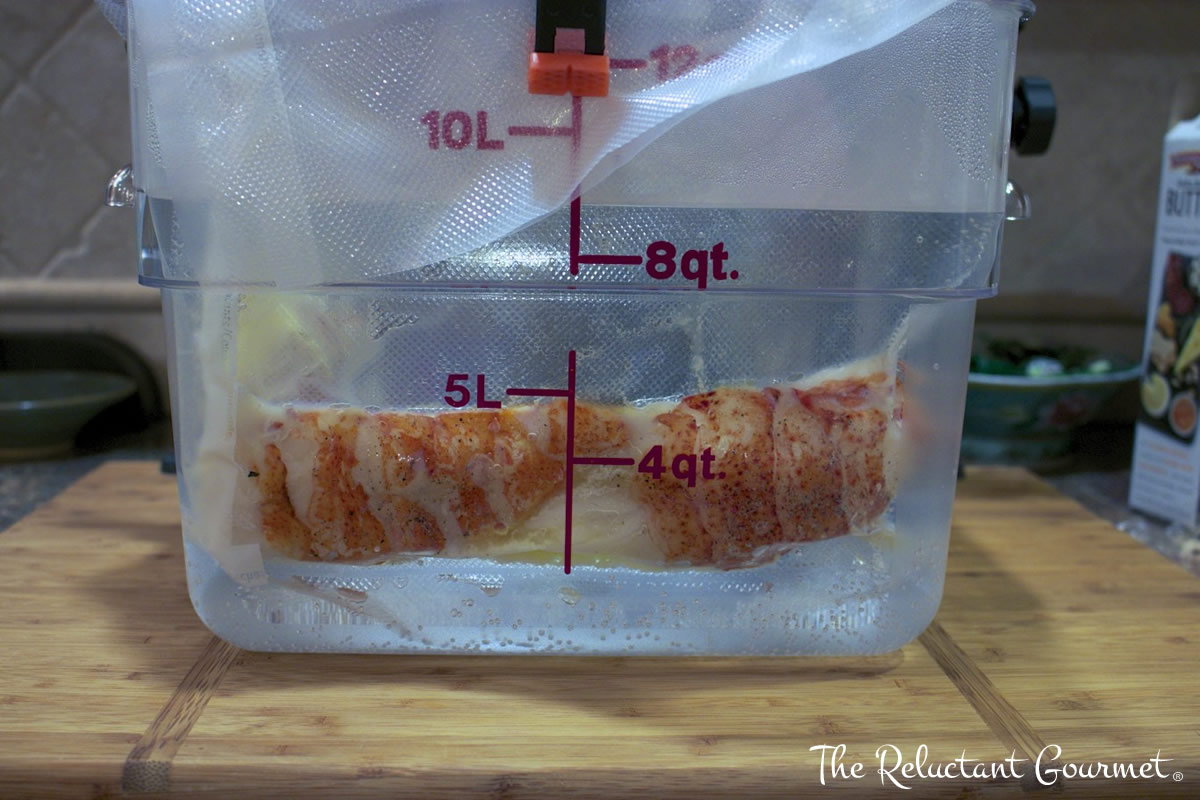 My wife asked for lobster tails, fresh artichokes and a baked potato for her birthday dinner.  My friend Chef David Nelson had told me about his very positive experience of preparing lobster tails sous vide style so I gave it a go.

The hardest part of this dinner was getting the tails out of their shells. I used kitchen scissors to cut underneath the lobster and then a spoon and fingers to get the meat away from the shell. Next time I may wear some thin work cloves.

Chef David has been trying to perfect his Sous Vide Poached "Lobstah Tails" recipe and I think he did it. 18 minutes at 141°F with 1 - ½ tablespoons of butter per 5 ounce shell-less tail. Again, the meat was wonderfully cooked throughout and the texture perfect.

I did throw the cooked tails in a hot pan with just a little of the butter from the bag to give them some more color. It was a wonderful meal I hope to duplicate a few more times. 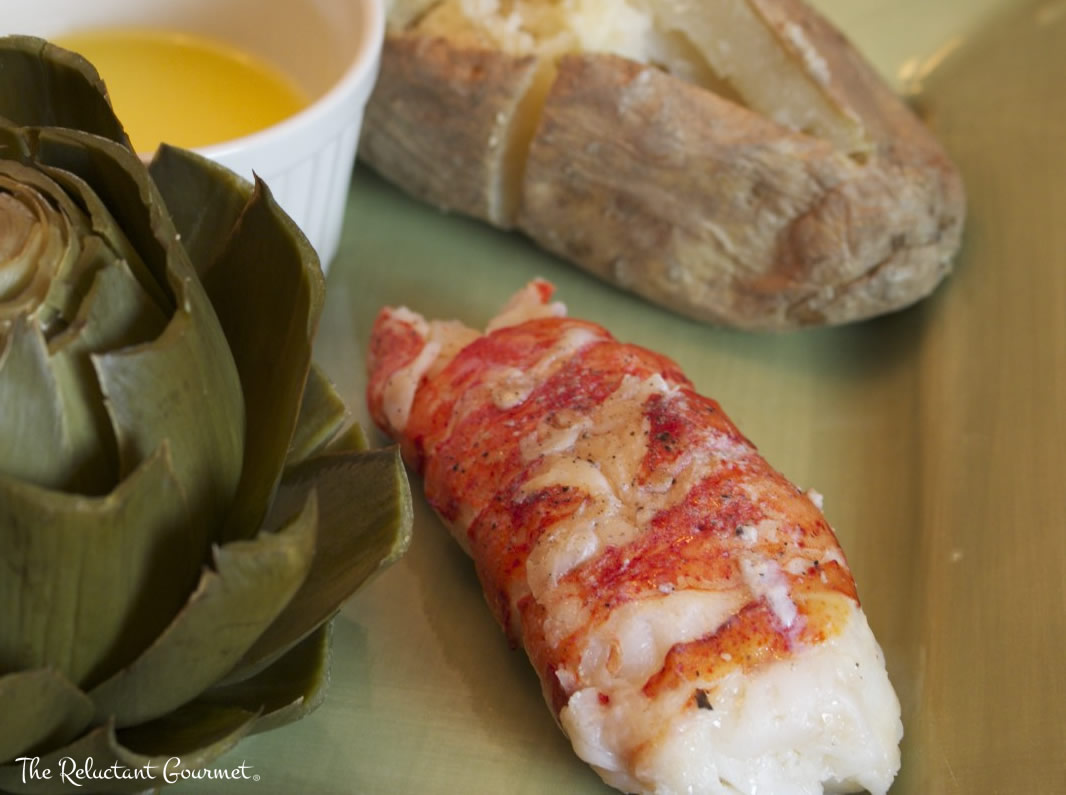 As you can see, my first attempts at cooking sous vide went well. Much easier than I expected with even better results than I hoped for. I did make a few mistakes along the way including these two:

Water Temperatures - you don't need to start with cold water. You can use the hot water from you tap which is around 120°F.  So if you are cooking a steak at 130°F, you only have to raise the temperature 10 degrees.

After a long time of trying to get my giant plastic tub of water up to the correct temperature, I finally decided to heat up a tea kettle with water to get things moving. I also used a kitchen towel to cover the container. This seemed to help raise the temperature faster too.

So far everything I tried cooking sous vide has turned out well. There is a lot more for me to learn about this technique and I look forward to discovering as much as I can and sharing it with you in future posts.