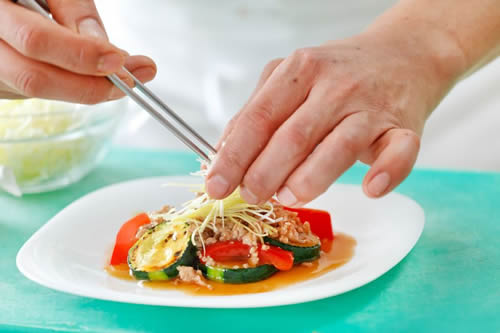 Some of the Top Culinary Institutes Across America

Although a good culinary education can be found in schools around the world, there are a few key areas known to be meccas for culinary arts training. In many cases, the best training occurs in metropolitan areas, where the number of restaurants and competition are high. In the United States, some of the best places to go for culinary programs are on opposite coasts: in New York and California.

New York culinary schools are among the most recognized in the world. The city and many surrounding communities on the East Coast (including Connecticut, Pennsylvania, and Vermont) offer great variation in food styles, program lengths, and even career options following graduation. And because there are over 20,000 restaurants in New York City alone, its no wonder students – and reputable schools – call this place home.

Some of the more recognizable culinary school names in and around New York include:

Institute of Culinary Education (ICE), one of the most prestigious culinary schools in the world.

Culinary Institute of America (CIA), a school that consistently turns out big names in the culinary world.

Of course, you don't have to go East Coast to get a good culinary education. California is equally well-known for its quality of schools. But don't expect the exact same kind of training. Culinary schools in New York often center on classical training; schools in California tend to be a little more modern and focused on healthy, alternative cooking styles.

If you don't live in one of these “foodie” centers, or if you don't want to pack up and move to go to culinary school, don't despair. There are culinary colleges in every state in the United States, and big names pop up in Texas, Oregon, Arizona, the Midwest, and the South.